The Latest: Suspect in custody in New Orleans parade crash

NEW ORLEANS -- The Latest on a vehicle plowing into a parade crowd in New Orleans (all times local):8:30 p.m.New Orleans police say the number of people injured after a vehicle crashed into a crowd watching the Krewe of Endymion parade in the Mid-City section... 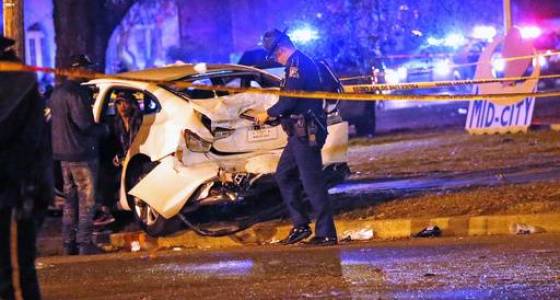 NEW ORLEANS -- The Latest on a vehicle plowing into a parade crowd in New Orleans (all times local):

New Orleans police say the number of people injured after a vehicle crashed into a crowd watching the Krewe of Endymion parade in the Mid-City section of New Orleans has increased to 28 and a suspect is in custody.

Police Chief Michael Harrison says one person in custody and that he is being investigated for driving while intoxicated. Harrison was asked twice if terrorism was suspected. While he didn't say "No" he said it looks like a case of DWI.

Harrison says that 21 people were hospitalized after the crash with five victims in guarded condition. Seven others declined to be hospitalized.

This story has been corrected to clarify that Harrison did not say that incident did not look like it was terror related when asked by the media but that it seemed to be a DWI case.

Police say 12 people were injured when a vehicle plowed into a crowd watching the Krewe of Endymion parade in the Mid-City section of New Orleans.

The crash was reported Saturday at about 6:45 p.m.

New Orleans Police Department spokeswoman Ambria Washington said that "initial reports show so far that about a dozen people are in critical condition."

She says that number could increase as the investigation continues.

One woman at the scene told The New Orleans Advocate (http://bit.ly/2miOHGP) that a silver truck whisked by her just feet away as she was walking through the intersection.