The Latest: 2nd death in Illinois blamed on severe storms

CaptionCloseOTTAWA, Ill. (AP) — The Latest on severe weather affecting a large swath of the central U.S. (all times local):7:30 a.m.Authorities say a second person in Illinois was killed by the severe storm system that swept through the Midwest and... 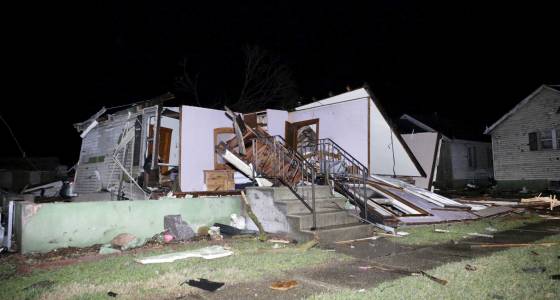 OTTAWA, Ill. (AP) — The Latest on severe weather affecting a large swath of the central U.S. (all times local):

Authorities say a second person in Illinois was killed by the severe storm system that swept through the Midwest and spawned tornados.

White County Coroner Chris Marsh said Wednesday that the system moving through the central U.S. Tuesday and Wednesday spawned a twister that struck a small building near a house in the Crossville area, which is in southeastern Illinois near the border with Indiana. It killed a 71-year-old man and injured his wife.

The system has been blamed for killing at least two other people, including one who was struck by an uprooted tree in the central Illinois community of Ottawa and another who was killed by an apparent tornado that tore through Perry County, Missouri, about 80 miles south of St. Louis.

The storms also battered parts of Indiana as they moved eastward into Ohio and states to the south.

The National Weather Service is sending crews to evaluate the damage from a powerful storm system that spawned deadly tornadoes in the nation's midsection.

Meteorologist Kevin Smith in Paducah, Kentucky, says the crews will determine the width, path and intensity of the tornadoes that hit Tuesday in Missouri, Illinois and elsewhere.

One of the most damaging tornadoes hit near a rural area of southeast Missouri. Perry County Clerk Jared Kutz says one person was killed and eight to 10 homes near the town of Perryville were badly damaged. Several cars and trucks were blown off of Interstate 55.

Officials say thousands of residents around Ohio awoke to power outages, damaged homes or downed trees after thunderstorms battering the Midwest brought heavy rain, high winds and even quarter-size hail to some parts of the Buckeye State.

Numerous schools delayed the start of classes Wednesday as continuing storms and gusty winds slowed morning commutes. High water or flooding concerns were reported on various roadways from southwestern Ohio all the way north toward Cleveland.

WBNS-TV reports a suspected tornado in southern Ohio's Highland County was blamed for damaging several homes near Leesburg. No serious injuries were reported there.

Some parts of the state were slated to remain under tornado watches or flooding advisories into late morning.

The National Weather Service issued tornado warnings for areas including LaGrange County in northern Indiana on Tuesday night as the storms moved through the Midwest. Other portions of northern Indiana were under severe thunderstorm warnings that expired early Wednesday.

WANE-TV reports power lines were knocked down in the Fort Wayne area and part of a roof was torn off a convenience store in Fort Wayne. No serious injuries were immediately reported.

In southwestern Indiana, WXIN-TV reports storm damage in Posey and Gibson counties that included damaged homes as well as downed trees and power lines. Utilities reported several thousand customers were without power in Posey, Jackson and some other counties.

The National Weather Service says survey teams will be moving across Illinois to catalog damage and determine the number of tornados that swept across the state.

Meteorologist Amy Seeley says the teams on Wednesday also will determine how long tornados were on the ground.

Illinois Emergency Management Agency spokeswoman Patti Thompson says one person was killed Tuesday in the central Illinois city of Ottawa by a tornado spawned by a late-winter storm system.

A tornado hit the LaSalle County Nursing Home in Ottawa, but no serious injuries were reported to residents. Gov. Bruce Rauner plans to survey the damage Wednesday morning.

Naplate Fire Chief John Nevins estimates about 50 homes were damaged in the village west of Ottawa. Nevins told the News-Tribune of Ottawa that only minor injuries were reported.

Tornadoes touched down in the upper Midwest and northern Arkansas, killing at least two people, as a spring-like storm system posed a risk to 45 million people.

Compact but strong storms known as supercells raked parts of the central U.S. on Tuesday, causing damage from Arkansas to Iowa and Illinois. Wind-whipped wildfires destroyed homes in Texas.

At Ottawa, Illinois, state Emergency Management Agency spokeswoman Patti Thompson said a tornado victim was killed by an uprooted tree. Minor injuries were also reported at an Ottawa nursing home, but Thompson said the number of those hurt in the twisters was not known.

Meanwhile, one person was killed when an apparent tornado ripped through Perry County, Missouri, about 80 miles south of St. Louis. Eight to 10 homes near the small town of Perryville were badly damaged and winds were so strong that several vehicles were blown off of Interstate 55. Perry County Clerk Jared Kutz said search and rescue crews were going door-to-door and checking the highway to see if there were other victims.