Famagusta 14°
overcast clouds
BUSINESS EDUCATION ENTERTAINMENT HEALTH POLITICS SCIENCE SPORTS TECHNOLOGY
10:22 Four Benefits of Hiring a Dedicated Development Team
04:48 Mark Kelly, President of Safety Marking Inc., Discusses Structuring Effective...
17:58 Trump wants to play golf at the Biden swearing-in in Scotland - but is...
17:54 First doubts Regarding tightened Steps: two National Countries Extract...
10:39 Covid-19 : in France, the end of containment and entry into force of the...
04:34 The schools of Rome will use the Internet with light bulbs: what it is...
10:58 Kratom Tea: How Is It?
11:46 Office Furniture Products for you!
12:17 Top Clubs, Their Value, Revenue And Current Standings
11:14 Reasons Why Rewarding Yourself is a Good Practice
BIST
1536
GOLD
437.325
USD
7.3501
GPB
10.1044
EUR
8.9393
Breaking News
Navigating a Hearing Disorder Diagnosis
Close

The death of the Reagan agenda

President Donald Trump's appearance on Friday before the Conservative Political Action Conference was quite the love affair, which is pretty remarkable given that one year ago, he skipped the same gathering (after initially agreeing to attend) out of fear... 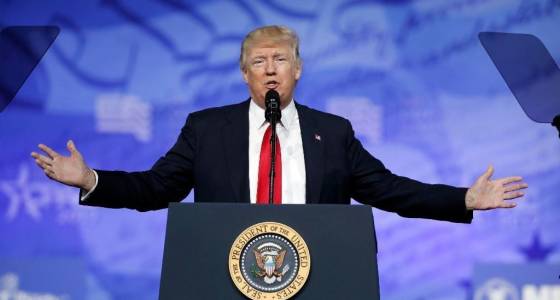 President Donald Trump's appearance on Friday before the Conservative Political Action Conference was quite the love affair, which is pretty remarkable given that one year ago, he skipped the same gathering (after initially agreeing to attend) out of fear that many in attendance had organized a walkout during his appearance. Such a protest this year was simply unimaginable within the friendly confines of the Gaylord National Resort and Convention Center where the political soldiers of the right appeared to now be in full lockstep with the Trump brand of Republican populism.

What made the moment all the more remarkable was that these same people who once swooned at Ronald Reagan, the last GOP president to attend a CPAC gathering in his first year in office, seemed not to have a single bone to pick with the Trump agenda despite its many departures from the Reagan to-do list. Given how CPAC participants have long approached conservatism with the same kind of orthodoxy that the French reserve for their native tongue, this remains perhaps the most stunning achievement of the Trump election model — to the winner goes the movement.

And no issue better represents this evolution than foreign trade, specifically the nation's withdrawal from the Trans-Pacific Partnership or TPP, which Steve Bannon, Mr. Trump's chief strategist, bragged on Thursday was the top achievement of the administration's first month in office. He received quite a sustained round of applause for that line, as did President Trump the next morning when he gave a shout-out to Sen. Bernie Sanders, of all people, for being "right about one thing" — his opposition to trade.

While suspicion and resentment of all things foreign turned out to be a winning revival of the "America First" message for Mr. Trump, how did rejection of free trade and so-called "globalism" and a near-gleeful acceptance of tariffs become so easily swallowed by the right? This wasn't Michigan or Ohio, concerned about lost manufacturing jobs; this was a national audience with, one presumes, a lot of individuals with actual day jobs who have directly benefited from trade. Perhaps even a few might be passingly familiar with the Port of Baltimore a mere 48 miles up the road where trade has provided the wellspring for the kind of well-paying, blue collar jobs that Trump acolytes claim to crave.

Port traffic grew to record levels last year, and its success accounts for 13,650 direct jobs with perhaps 127,000 Maryland jobs linked to the port in some way, which is more than the coal mining employs nationwide (an estimated at 69,460, according to the Bureau of Labor Statistics). The port has become so successful that the state is buying up property for it to expand. Who will stand up for the necessary trade deals to sustain this kind of job growth in Congress or the White House? Mr. Trump and Mr. Bannon like to say that they simply seek more favorable trade agreements, but they've yet to point to an arrangement they like. And Democrats certainly aren't inclined to pick up the free trade banner.

If there is a shortcoming with arrangements like the TPP or the North American Free Trade Agreement, it is that they inevitably create change. Some companies adapt, others do not. The loss of manufacturing jobs has been mostly a product of technology. The trade deficit? Credit it to U.S. economic success, capital inflows and the strong dollar. The best trade deals are mutually beneficial, and NAFTA, which Mr. Trump has called the worst trade deal ever signed, has created about 6 million jobs in this country, according to the U.S. Chamber of Commerce.

What would Ronald Reagan say? It's not hard to find out. In his famous 1977 speech to CPAC, he spoke of the conservative ideology as an appeal to principle and common sense, not scapegoating or fear-mongering. There was criticism of communists and dictators but not of foreign trade. He spoke fondly of free markets, free enterprise and limited government intervention, not tariffs. "Extreme taxation, excessive controls, oppressive government competition with business, galloping inflation, frustrated minorities and forgotten Americans are not the products of free enterprise," Mr. Reagan said that day.

And what did President Trump offer? His customary attack on the press, his usual self-congratulatory campaign speech and his own to-do list with its poisonous message about how the country is being taken advantage of by others around the globe. The only surprise? That everyone in the room appeared to be delighted with it all.