World-renowned autism activist Temple Grandin visited Santa Rosa Saturday to accept an award and share her insights into the condition that she suggested is far more common than many know or believe. Grandin, 69, was diagnosed with autism as a young child... 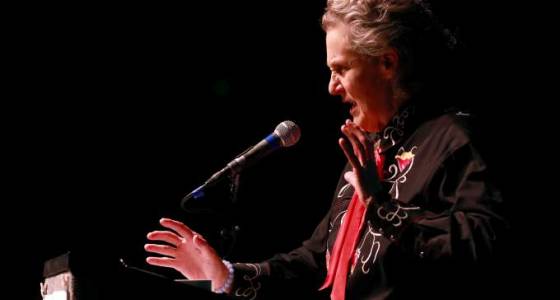 World-renowned autism activist Temple Grandin visited Santa Rosa Saturday to accept an award and share her insights into the condition that she suggested is far more common than many know or believe.

Grandin, 69, was diagnosed with autism as a young child but went on to have successful career as an industrial designer, college professor and author.

She told the hundreds who attended the autism one-day conference at the Luther Burbank Center for the Arts that the tech firms in Silicon Valley and scientific centers around the globe are filled with people “on the spectrum,” a phrase used to describe the broad range of severity in autism.

For example, Grandin said, striking a lighter note, her visit to NASA’s Jet Propulsion Laboratory in Pasadena, which she noted designed the Martian rover program, seemed particularly replete with singularly focused minds that can be a hallmark of the condition.

“Let me tell you, there was Asperger’s and mild autism all over that place!” Grandin said to huge laughs from the admiring audience.

Grandin and her mother, Eustacia Cutler, who participated in the conference by Skype, received lifetime achievement awards from Anova, a Santa Rosa-based provider of services to families raising autistic children.

“I think Temple Grandin is a very intelligent, hard-working woman who happened to have autism and happened to have a mother who was strong and smart and had the resources to advocate for her daughter,” Anova founder Andrew Bailey said in presenting the awards.

Grandin peppered her talk with plenty of advice for parents and educators of kids with autism, recommending flexible, hands-on learning environments based on particular interests, making time for free play and art, plenty of chores and, when appropriate, work outside the home.

She noted that by the time she was 16, she had outside jobs sewing, cleaning horse stalls and working as a roofer, which he noted probably would be illegal today. But she said the work gave her confidence and social skills she might not have otherwise developed.

She urged parents and teachers to give autistic kids exposure to a wide range of subjects and experiences and to let them pursue those interests even if, like hers, they are unconventional.

She urged educators to look for the underlying causes of autistic kids’ behaviors. Sensory sensitivity often leads to the anxiety that leads to so much antisocial behavior, she said, noting that mild doses of antidepressants ultimately helped her.

Grandin, who became an expert in livestock handling and transport, told the story of how the cattle managers at one of the slaughterhouses she designed recently were “prodding the heck out of” the animals to get them to travel through the chute. The reason was a light that Grandin had designed to lead the cattle forward had gone out, making the cattle hesitant to move.

“Just fix the light!” she said.

Michelle Parenti, of Brentwood, has a 7-year-old daughter, Marlee, who is autistic. Parenti said she was struck during Grandin’s presentation by the similarities between her daughter’s mind and Grandin’s. Grandin repeatedly was distracted from her talk when her slideshow experienced technical difficulties. Parenti said she’s seen that exact pattern before.