In a world beset by warfare and increasing tension, more nations see what U.S. commandos have accomplished and want to emulate their success.6 Months Ago2 Weeks Ago2 Weeks AgoSo they come to MacDill Air Force Base in Tampa, home to U.S. Special Operations... 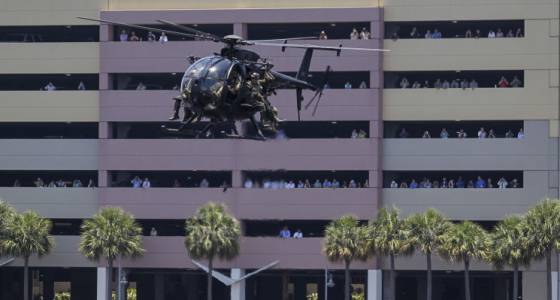 In a world beset by warfare and increasing tension, more nations see what U.S. commandos have accomplished and want to emulate their success.

So they come to MacDill Air Force Base in Tampa, home to U.S. Special Operations Command — responsible for coordinating the global war on terror and providing fully trained and equipped Navy SEALs, Army Rangers, Green Berets and Delta Force, and Air Force and Marine special operators.

"Tampa been a hub throughout all these years, of course," said Norwegian Rear Admiral Nils Johan Holte, head of his nation's special operations.

Holte was one of several international military commanders in the Tampa area last week for the Global SOF Symposium, a gathering of hundreds of special operations experts.

After the symposium, one of those leaders, Romanian Chief of Defense Gen. Nicolae Ciuca, paid a visit to MacDill to see Army Gen. Raymond A. "Tony" Thomas, head of U.S. Special Operations Command.

Romania, a key U.S. ally, is the third largest NATO contributor to the mission launched in Afghanistan after the 9/11 attacks. Romania serves as a major transportation center for U.S. military operations in the region. It is also in the geographic center of Europe's tensions — bordering Ukraine, on the Black Sea shoreline, and abutting the Balkans. And it is about to send troops to Iraq to help in the fight against the so-called Islamic State.

Given increasing Russian aggression, including use of its own commandos in Eastern Ukraine, Romania is building out its special operations forces. In an interview with the Tampa Bay Times, Ciuca said his visit with Thomas comes a year after the SOCOm commander went to Romania to observe its commando force and offer advice.

"Special forces are very expensive," Ciuca said. "Romania is not the United States, but we are using your history and applying it to our national specifications. Everything General Thomas did was very helpful. Now we are on a good track."

SOCom did not respond to interview requests for this story.

Retired Army Col. Stu Bradin, who created the Global SOF Foundation that produced the symposium, was McRaven's point man for launching the J3I. It began with representatives from 10 nations and has doubled since then.

Romanian Col. Claudio "CD" Dobocan, his nation's representative to the J3I for 18 months, explained the value.

"Sometimes the distance between Rome and Madrid is shorter here than in Europe," he said.

"We contribute to forward planning," he said. Representation in J3I also provides a "tool for rapid reaction in case of a crisis."

Like Romania, Norway has been a long-time U.S. ally and sent troops into Afghanistan in December 2001. Holte, the Norwegian SOF commander, said participation in the J3I is "a great evolution."

By being inside SOCom, Norway, the U.S. and allies can work more closely together "in the planning and execution of many missions and many operations," said Holte, who is no stranger to Tampa. He used to be the Norwegian representative to the CentCom international coalition.

While Romania and Norway have contributed to the battle against jihadis, they also have to deal with a security challenge in their own back yard — an increasingly aggressive Russia, which annexed Crimea and continues to attack eastern Ukraine.

It's a point not lost on U.S. military commanders planning for battles that may not happen but still require preparation.

"The next fight, which is staring us right in the face ... is Russia," said Army Maj. Gen. William Hix, the Army's director of strategy, plans and policy, speaking at the symposium about a range of potential challenges.

"Russia is a challenge today and will continue to be a challenge for another potentially 20 years," he told an audience of military leaders from more than 20 nations at Innisbrook Golf and Country Club in Palm Harbor.

"They study our playbook," said Hix, adding that the Russians have made investments "to challenge us in a number of areas. Look at Ukraine and actions in Syria. We see harbingers of future war there in the speed of violence and lethality they bring to the battlefield."

About 5,000 miles east of Romania is another flashpoint — the Korean peninsula, where a recent missile test followed by the assassination of the North Korean leader's half brother in Thailand have added to tensions.

The recent North Korean missile launch is particularly troubling because "the speed at which they are progressing is a little bit faster than I hoped," Chun told the Times.

Chun said participation in the J3I can accelerate development of South Korea's special forces, about 10,000 commandos and an equal number of support troops.

"I think the United States is probably 10 to 20 years beyond what we are able to envision back in Korea," said Chun, now a visiting scholar at the Johns Hopkins School of Advanced International Studies.

The South Korean representative's proximity to SOCom will be transformational, Chun said.

"The United States has been at war for more than a decade," Chun said. "The experiences of what to do, and what not to do, will always be good advice for a nation like mine."