Taking your eyes off the cellphone is a matter of life and death: Dennis McCarthy

This is where it happens, where you finally reach them.A young trauma nurse stands in the back of a darkened high school classroom Wednesday morning watching the reaction of three girls sitting together in the front row to a graphic film on texting and driving.Earlier,... 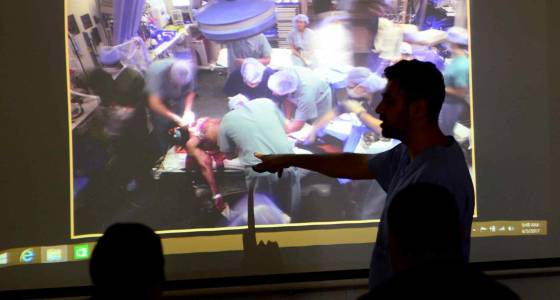 This is where it happens, where you finally reach them.

A young trauma nurse stands in the back of a darkened high school classroom Wednesday morning watching the reaction of three girls sitting together in the front row to a graphic film on texting and driving.

Earlier, they had raised their hand when asked who in this class of seniors had a driver’s license.

“Look at how focused they are,” the trauma nurse, Christian Diance,whispers to me. “They can’t take their eyes off the screen.” None of the kids could. They all saw themselves and their friends in that car about to crash head on with another.

One second a young, female driver was laughing and having fun with her girlfriends in the car, the next she was screaming in horror.

She had looked up from texting on her cellphone too late to avoid the collision. The film shows the girls being whipped around the interior of the car in slow motion like rag dolls. When the car finally comes to a stop, it’s broadsided by another car.

The young driver who was texting finally comes to behind the crushed steering wheel, and slowly looks around at the bloody, twisted wreckage inside to see all her girlfriends are dead. She begins to scream uncontrollably.

In the other car, a baby and mother and father are dead. The only survivor is a little girl in the back seat pleading with her parents to wake up.

It’s chilling, heartbreaking, and utterly riveting education — a must-see for every high school student with a driver’s license or about to get one. The DMV should make it mandatory viewing for all drivers when it’s time to renew their license.

“These kids can read all the horror stories about texting and driving, but nothing gets to them until they actually see with their own eyes what can happen,” says Selma Duran, who has opened her senior physiology classes at San Fernando High to visits from the trauma team at nearby Providence Holy Cross Medical Center in Mission Hills.

These are the men and women who see the effects of drinking and driving, texting and driving, and gun violence in the community every day. It’s not a story to them. It’s their life.

“I’m the one who has to talk to your mother and father, tell them you’ll never walk or talk again,” says trauma surgeon Reza Kermani who followed trauma nurse Melissa Barnes to speak after the film ended.

“It’s the absolute worst feeling in the world. This is no joke, guys. We’re here because we don’t want you to be one of the statistics lying on our table.”

When it’s Diance’s turn to talk, there are about 10 minutes left in the class, but no one is looking at the clock. He is the closer. Dr. Kermani and nurse Barnes have done their job — grabbed these kids and shaken them.

Now, it’s Diance’s turn to build them up, show them a kid from their neighborhood who just bought his own home at 26, show them there is a way out.

Diance was raised in the government housing projects in Pacoima, not far from where he stands now in his hospital scrubs. His father was a steelworker, his mother a Mexican immigrant who went from being a housekeeper to a job as a charge nurse in the labor delivery unit at Providence.

Maria is her name and she made sure her sons kept their noses in a book and out of trouble, while their father, the disciplinarian, offered simple, sage advice — “Listen to your mother if you know what’s good for you.”

His boys listened. Two became nurses, one a cop.

“I went to Van Nuys High School where I played football, baseball and ran track,” Diance tells the kids. “I decided early on I wanted to become a nurse, but I didn’t want to share it with anybody because I knew all my friends thought nursing was for girls.

“I was captain of the football team. I thought people would make fun of me. And, they did.”

One day in an economics class, the teacher asked everyone what they wanted to be when they grew up? Diance finally admitted he wanted to be a nurse, and, yes, his friends chuckled and laughed.

But he ignored them and followed his mother’s advice. He stuck his nose deeper into a book, getting A grades and scholarship offers.

“Now, I help people for a living, every single day. The adrenaline rush I got from playing football, baseball and running track, I still get every day working in the trauma unit. It’s the same feeling, the same high.”

Getting good grades wasn’t cool when he went to high school, he tells the kids. It was kind of embarrassing, like maybe you were a nerd or something. But the friends who thought it was cool getting D’s are the same one’s asking their old high school buddy who got A’s if they can use him for a reference now.

“You want to succeed?” Diance asks the class. “Then get good grades and listen to that person over there, that teacher right there,” he says, pointing to Duran. The kids laugh, but they know he’s right.

“Don’t get sidetracked, and please, PLEASE, don’t drink and drive, don’t text and drive. I see way too many kids come in who do. I know you guys don’t see it, but I do. This is very real.

“I want you all to be trauma nurses instead of trauma patients.”

The bell rang, but none of the kids was anxious to leave. The last 45 minutes had drained them, given them a lot to think about. When he got back to the hospital, Diance had already received several emails from students in the class thanking him for inspiring them.

The captain of the football team who wanted to be a nurse felt that old adrenaline rush kicking in.

Dennis McCarthy’s column runs on Friday. He can be reached at dmccarthynews@gmail.com.