More than 300 Lake County-area police officers and residents immersed themselves in the chilly waters of Fox Lake on Sunday to support Special Olympians during the annual Fox Lake Polar Plunge at Lakefront Park.Presented by the Law Enforcement Torch Run and... 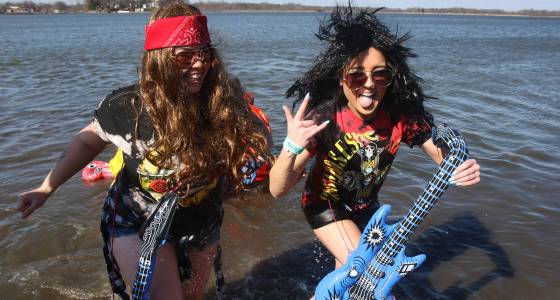 More than 300 Lake County-area police officers and residents immersed themselves in the chilly waters of Fox Lake on Sunday to support Special Olympians during the annual Fox Lake Polar Plunge at Lakefront Park.

Presented by the Law Enforcement Torch Run and GEICO, the event raises money to help the athletes who compete in Special Olympics Illinois.

"We have some great costumes with a huge group dressed up as Minions and last year's winner, Deadpool, who will jump in the water, and also a whole lot of 70s and 80s bands," said Brenden Cannon, Area 13 director for Special Olympics Illinois. "It gets better each year. This weather is amazing compared to the few years when we were in negative degrees."

More than $85,000 was raised from the event, which featured teams from the police departments of Fox Lake, Wauconda, Mundelein, McHenry and Vernon Hills dressed as leprechauns, rock stars and beach bums.

"Special Olympics has a been a law enforcement charity that we have supported for many, many years," said Jim Levicki of the Vernon Hills Police Department, as he stood dressed in an orange beard and a large inflatable green and white striped hat. "It's not so bad. The sunshine makes it a lot better."

After he took the plunge with six other officers dressed as leprechauns, Levicki and his colleagues came out of the icy lake shivering, but with smiles on their faces.