Syrian peace talks flounder as participants ask: Where is the U.S.?

GENEVA – The vacuum in U.S. policy on Syria is being keenly felt at the latest round of peace talks aimed at negotiating a political solution to the Syrian war — talks that seem destined to wind down this week without meaningful progress.Five days into... 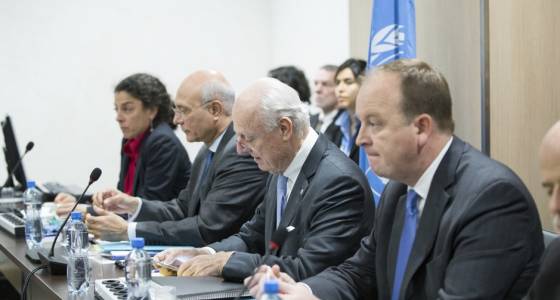 GENEVA – The vacuum in U.S. policy on Syria is being keenly felt at the latest round of peace talks aimed at negotiating a political solution to the Syrian war — talks that seem destined to wind down this week without meaningful progress.

Five days into a round of discussions intended to take place between delegations representing the Syrian government and the opposition, government and opposition negotiators still have not met. Instead, the talks, due to end Friday, have become snarled in debates about procedures and process without yet addressing the major issues surrounding the remote possibility of finding a political solution to the nearly six-year-old war.

These talks, known as Geneva IV because they represent the fourth round of discussions aimed at securing a political settlement on the basis of a communiqué drafted in Geneva by the United States and Russia in 2012, are taking place against the backdrop of a new regional balance of power in which Russia has the leading role in Syria.

For the first time, the United States is no longer taking the initiative in pushing for a negotiated settlement. The rout of rebels from their stronghold in East Aleppo in December was a defeat for U.S. policy as well as for the Syrian opposition, and it effectively left a vacuum of U.S. decisionmaking on Syria that has yet to be filled by the new Trump administration.

Although Russia has since sought to position itself as a mediating power between the government and the opposition, there are growing questions over how much pressure it is prepared to put on President Bashar Assad to make concessions, diplomats said. Russia's veto of a U.S.-backed U.N. Security Council resolution Tuesday that would have imposed sanctions on the Assad regime for its continued use of chemical weapons has further exposed the gulf between opposition and Russian perspectives on the war.

"We all desperately need the U.S. to engage in this and drive this forward with the Russians. The process is skewed in one direction. There is no other counterweight," said a Western diplomat who spoke on condition of anonymity.

U.S. diplomats have attended the talks alongside representatives of European and regional allies. But until the Trump administration articulates its policy on Syria, participants said, there is little reason for either the Syrian government or the opposition to make substantial concessions.

Both sides have been encouraged by President Donald Trump's often contradictory statements on the Middle East to believe that the new administration may shift its policy in their favor. His emphasis on the importance of fighting the Islamic State in Iraq and the Levant has raised hopes in Damascus that the United States would drop its support for the Syrian opposition and join an alliance with Assad against terrorism.

Bashar al-Jaafari, the lead negotiator for the Assad government, has stressed that the focus of the talks should be on fighting terrorism, not on a political transition from Assad's rule that the United States had demanded in previous years.

The opposition is likewise optimistic that Trump's pledges to roll back Iranian influence will translate into more robust support for the rebels than was the case under the Obama administration. Assad owes his survival in large part to Iran's immense support.