You can call Jim Staricha at night and he’ll answer the phone. But if you’ve plunged your truck or car through a crack or pressure ridge in the Lake Mille Lacs ice, he’ll wait until morning to recover your vehicle.“We stopped... 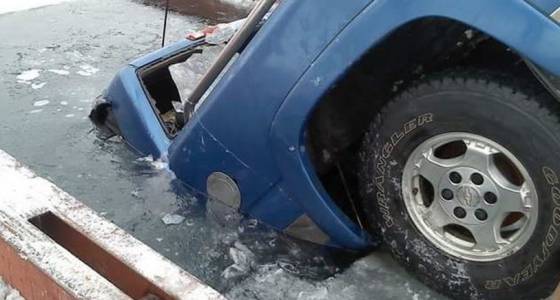 You can call Jim Staricha at night and he’ll answer the phone. But if you’ve plunged your truck or car through a crack or pressure ridge in the Lake Mille Lacs ice, he’ll wait until morning to recover your vehicle.

“We stopped going out at night a couple years ago,” Staricha said. “Too dangerous. It’s not worth it.”

Staricha owns a specialized business: In winter, he recovers pickups, cars, four-wheelers, side-by-side ATVs — you name it — from Mille Lacs, which remains one of the state’s most popular cold-weather angling destinations, despite its tight walleye harvest restrictions.

He is, some say, the best at what he does. But don’t expect him and his crew to angle onto Mille Lacs in a blizzard, either, to recover your prized pickup or other vehicle.

He’ll wait until the weather clears. Submitted photos A sport utility vehicle wound up partially submerged after breaking through the Mille Lacs ice.

“It was probably 15 years ago, when we had real winters, that one of my employees and I headed onto the lake to help someone, when the weather turned bad,” Staricha said. “We were in a Toyota pickup and we got stranded on the ice for two days. We played cards to pass the time. I think the other fellow worked the shift for free, because I took all his money.”

Staricha, 58, learned his unique craft by trial and error. A longtime racer of demolition cars (“when I was young I’d race anything”), he owns a salvage business (“you know, a junk yard”) in addition to a house-moving business and a towing outfit, Northland Towing, headquartered in Isle, Minn., hard by the Mille Lacs shoreline.

Years ago, Staricha said, a “couple of old guys used hand winches and come-alongs” to recover vehicles from Mille Lacs.

Figuring there had to be a better way, he built specialty trucks for yanking waterlogged vehicles from the lake bottom. Weight was his primary concern: Anything that wasn’t necessary for the job was discarded.

“We use older trucks, not newer ones,” he said. “Older ones are a lot lighter. We pulled off everything we didn’t need, including the pickup beds and interiors, and built custom winches on them.”

Today, Northland Towing has four such vehicles, each a 1981 model. Already this winter he’s used them to pull 15 trucks and other vehicles from Mille Lacs.

Last week, he and his crew winched a Ford pickup out of Cove Bay on Mille Lacs.

“The ice was honey-combed so it was kind of tricky,” Staricha said. “That was the second time I pulled that particular truck out. The first time was seven years ago. The dad was at the wheel then. This time it was the son.”

Nothing safe, or free

“Ice is not concrete,” he said. “There’s lot of stuff that can go wrong. A school of carp in a certain area can reduce ice thickness to 3 inches. Out on the mud flats of Mille Lacs, ice can sometimes run thin. One year we had open water out there the size of a football field. A snowmobiler didn’t see it and went in.”

People who have collision and comprehensive insurance generally are covered if their vehicle goes through the ice. Staricha’s charges, he said, are a bargain compared to what comparable services cost in the Twin Cities.

“It takes me about five hours to pull a truck off the bottom.”

In many instances, recovered vehicles are total losses, in part because the electronics and interiors are trash. This is especially true on Mille Lacs, whose muddy bottom can infiltrate nooks and crannies of vehicles that descend into it. Divers are sometimes needed to hook on a tow cable to a vehicle that is sitting on the bottom in deep water.

To recover a vehicle, Staricha employs two 44-foot-long steel beams measuring 1 foot square. One is placed on each side of the spot where the vehicle went through the ice.

The beams displace the weight of an overhead arch that supports a pulley system with which the submerged truck is lugged upward. Sometimes a cable is attached to the vehicle with a “J hook.” Other times a diver connects the cable to the vehicle’s rear shackle. Most time-consuming is cutting a hole in the ice big enough for the truck or car.

“Using the beams we can recover a full-size truck on ice that is only 6 inches thick,” he said.

Staricha has yanked cars, trucks and ATVs from Upper Red Lake and Lake of the Woods, among other waters, in addition to Mille Lacs. In summer, he is busy pulling boats from lake bottoms, using float tubes.

His biggest accomplishment: a road grader.

“I’ve never had the beams break through the ice,” Staricha said. “I’ve never lost any equipment. And I’ve never walked away from a job.”