CaptionCloseNearly 200 storm chasers paid tribute Sunday to the late actor Bill Paxton by spelling out his initials using GPS coordinates on a map depicting the heart of Tornado Alley.The effort coordinated by Spotter Network spelled out "BP" to honor the... 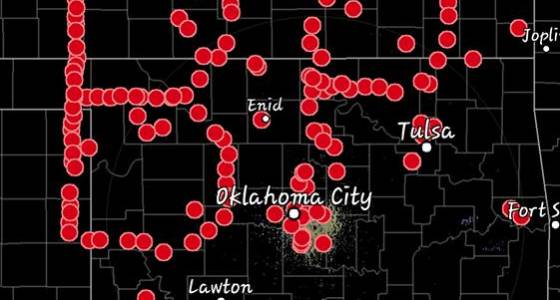 Nearly 200 storm chasers paid tribute Sunday to the late actor Bill Paxton by spelling out his initials using GPS coordinates on a map depicting the heart of Tornado Alley.

The effort coordinated by Spotter Network spelled out "BP" to honor the leading man in the disaster movie "Twister," which inspired a generation of storm chasers.

Storm chasers and storm spotters have spelled out the initials of fellow chasers in the tight-knit community four or five times before, but never for a non-chaser, said John Wetter, president of the nonprofit that tracks the positions of tornado chasers and works with the National Weather Service to update weather forecasts.

"There are probably hundreds, if not thousands, of meteorologists today — myself included — who were impacted by the movie 'Twister' and the role Bill played in that," Wetter told The Associated Press in a phone interview. " 'Twister' was kind of the first time in a mass media place the meteorologist became cool, if only for a little while."

The storm chasers spelled the initials on a map that was centered around Wakita, Oklahoma, a real town in the heart of Tornado Alley that served as the set for almost all of the movie, Wetter said.

Most people participating did not travel to log their dot on the map, but they instead entered GPS coordinates manually to spell the letters after the Spotter Network posted a rough outline of the project on its Facebook page and asked for help, Wetter said.

The letters took shape in real time on a map that went viral on Twitter as the day went on. The initials, made of red dots, stretched across parts of Texas, Kansas and Oklahoma on a black map.

Jake DeFlitch was one of the few storm chasers who drove to a point on the map to register his GPS dot. The 23-year-old graduate student at Oklahoma State University in Stillwater, Oklahoma, traveled about 20 minutes, he said, and then waited for the right moment to log his contribution.

"I waited until all the letters lined up," said DeFlitch, who recently dropped radar-equipped pods in front of tornados as part of a research project. "I was part of the 'P,' right below one of the connections, where the half-circle came back and connected with the straight line."

In the 1996 blockbuster, Paxton plays a storm chaser who's researching tornados during a twister outbreak in Oklahoma. Paxton and co-star Helen Hunt scramble to release a data-collection probe into the funnel of a tornado as they compete with another, better-funded research team that's using similar technology.

Paxton's death at age 61 after complications from surgery was announced Sunday.