MEDINA, Ohio - A community is as strong as the stories its members tell about their history. Last night, the Medina community packed Second Baptist Church on Bronson Street to hear some of those stories during the 15th annual Black History Month celebration... 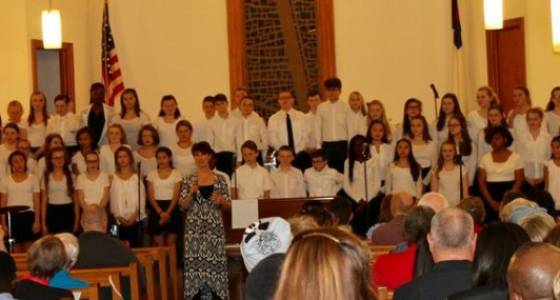 MEDINA, Ohio - A community is as strong as the stories its members tell about their history.

Last night, the Medina community packed Second Baptist Church on Bronson Street to hear some of those stories during the 15th annual Black History Month celebration sponsored by the church and the Medina County Branch of the American Association of University Women.

They heard stories about success, determination and service to others. They heard about the heartaches of the past and the hopes for the future. And they heard about Medina's connections to the larger Civil Rights struggle in the United States.

Medina residents of all ages and backgrounds filled the church sanctuary to overflowing.

"It's so good to see how you've packed this place out," said the Rev. Arthur Ruffin, church pastor.

Students from the ACE tutoring program at Claggett Middle School shared their thoughts on the importance of Black History Month, and choirs from Claggett and Garfield Elementary School performed.

The highlight of the evening was a short documentary film by Miles Reed sharing the family histories of Medina couple Tony and Rochelle McAfee. Their stories brought the pain of segregation and discrimination in the 1930s and 1940s South to vivid life.

Rochelle McAfee's grandfather, Elisha Davis, was among the first of a group of black businessmen who tried to bring the NAACP and black voting rights to Brownsville, Tenn., in 1940.

On June 16, 1940, a mob led by the county sheriff dragged him from his home and told him to leave town and never return.

He left his home, business and family and eventually settled in Niles, Ohio, where his wife, Nan, and seven children eventually joined him.

"They lost everything they worked so hard for in Brownsville," Rochelle said.

But Davis was the lucky one - Nan's cousin, Elbert Williams, was killed later than month, becoming the first NAACP organizer to be murdered and joining the ranks of Civil Rights Movement martyrs.

Johnson was born in Florence, S.C., in 1901. He had a gift for painting, and headed for New York City at age 17 to study art at the National Academy of Design. He later went to Paris to paint and continue his studies.

When he returned to Florence in 1930, he was shocked by the prejudice and discrimination he encountered. He eventually headed back to Europe, where he traveled extensively and created iconic pieces of art.

His colorful paintings capture African-American life - people living their lives at church, at work and at home. The paintings show the struggles they faced, but also emphasize how people transcended those situations, Tony said.

Johnson is remembered today as a part of the Harlem Renaissance, along with poet Langston Hughes and musicians such as Duke Ellington and Billie Holiday.

The McAfees want their children - and all of Medina's children - to understand their own particular place in America's history and to know that they can also have an impact on the future.

"You can do anything that you put your mind to. Don't let anyone tell you differently," Rochelle McAfee said.

"You are the future, but you are also the present," she said.

One of those students, Samantha Ponomarenko, took that sentiment to heart in starting the "Blanket Buddies" group, which bundles toys and hygiene products into handmade fleece blankets as care packages for county children.

Medina Police Lt. Dave Birckbichler said that in an era when people hear a lot of negative things about race relations and the tension between police and the black community, it's important to share the times when things go well.

He talked about the relationship between one of his officers and a youth football player, who shared their lives as the child grew into a teenager and now a college student.

"When you get tired of all the bad news, just look around in our community, because this is where you can find good news," Birckbichler said.

Other speakers included Dr. Brinca Hunter, who grew up in Medina and went on to have a 30-year career with the Medina County Board of Developmental Disabilities.

Her mother owned a dress-making shop in Medina and her stepfather had his own asphalt paving business.

"I was in the top 10 percent of my high school class. Whatever club there was, I was there. Except for drama and singing," Hunter said.

She attended Bowling Green State University for a year, then Baldwin Wallace for another year.

"Then I got married and we started our family, which was interesting and fun," she said.

Eventually, she got a job working at a grocery store before moving on to the Achievement Center, where she was encouraged to complete her education. She graduated from the University of Akron with a bachelor's degree in special education, then went on to earn a master's degree and doctorate.

"I personally have had a blessed life in Medina. There were many opportunities. But they're not going to just jump out at you. Nothing is given on a silver platter," she said.

Hunter's positive outlook on life and hard-working example influenced her young neighbor, Cheryl Mason, who was best friends with Hunter's daughter when they were growing up on Bronson Street.

One year, Mason shadowed Hunter at work. From then on, she knew she wanted to help people. Mason now works for Medina County Job and Family Services.

Mason said Job and Family Services is an agency that "believes in giving people a hand up" so they can go on to support themselves.

Pastor Ruffin's stepdaughter, Ashley Powell, is one of those people. Powell spent her early years living with her single mother and her brother in the Liberty Plaza housing development on Abbeyville Road. Her father, whom she describes as a good dad, spent time in prison.

"It wasn't until eighth grade that I realized I was different, that I was black," she said.

One day, a small group of kids threatened the black students, bringing the reality of prejudice into Powell's life.

About the time she began high school, her mother remarried and moved the family to Wooster. Powell wasn't happy about that, and began to hang out with the wrong crowd at her new school.

She ended up pregnant at 16.

Her son, Isaiah, was born the summer before her senior year. She went on the earn a 4.0 grade point average and serve as captain of the high school's color guard that year.

She received scholarships to earn an associate's degree in respiratory therapy, and is now finishing up her bachelor's degree and working for the Medina County Health Department as the health center's office manager.

She has also started a non-profit group called So Now What? The goal is to help young people answer the tough questions they have about what they can do with their lives.