Staging of 'The Bodyguard' heads to Hippodrome

Almost 25 years after moviegoers flocked to see Whitney Houston and Kevin Costner in the story of a pop music diva and the former Secret Service agent hired to protect her from a stalker, "The Bodyguard" is back, this time on the stage.On Tuesday,... 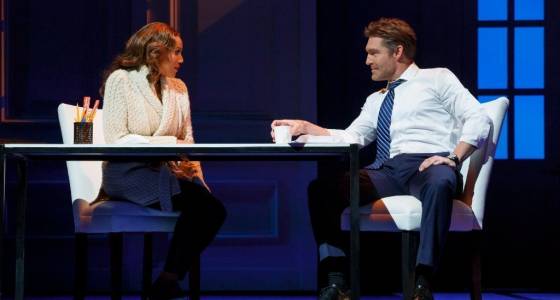 Almost 25 years after moviegoers flocked to see Whitney Houston and Kevin Costner in the story of a pop music diva and the former Secret Service agent hired to protect her from a stalker, "The Bodyguard" is back, this time on the stage.

On Tuesday, the musical version of the 1992 hit film reaches Baltimore's Hippodrome Theatre. It's the latest stop in a touring production of a show that originated in London in 2012 and came to the United States without passing Broadway.

The musical has also toured the United Kingdom, Ireland, a couple of countries on the Continent, and Korea. Australia is next in the spring.

"If you come in with a very critical or cynical eye, there may be a lot of stuff in the show that you will fault, and I understand that," says Academy Award-winning screenwriter Alexander Dinelaris, who wrote the book for the musical. "'The Bodyguard' is for people who want to go in and enjoy themselves."

Packing in more than a dozen popular songs by the late Houston, not to mention the Dolly Parton song "I Will Always Love You" that Houston famously covered, gives "The Bodyguard" an immediate hook. And in an era filled with movies-turned-into-musicals, that's a big hook.

Dinelaris, one of a quartet of writers who won Oscars for Best Original Screenplay for the 2014 film "Birdman," also wrote the current Broadway hit "On Your Feet," based on the life of Cuban-American singer/songwriter Gloria Estefan. He was free to fashion a story around her music. ("On Your Feet" is on the Hippodrome lineup next season.)

"With 'Bodyguard,' neither the music nor the script was malleable," the New York-born Dinelaris says. "People knew the story, and they already loved the music and knew the lyrics. But I agreed to give it a shot."

Although the basic outline of the stage show follows the arc of Lawrence Kasdan's original screenplay, Dinelaris found ways to tweak the plot. The central love affair that develops between pop star Rachel Marron, played by Deborah Cox on the tour, and bodyguard Frank Farmer, played by Judson Mills, remains. But another character gets brought more into the picture.

The Hippodrome Theatre's 2016-2017 subscription series will include seven musicals; two non-subscription musicals are also on the lineup.

"I wanted other people to sing the Whitney Houston songs, not just the Rachel Marron character," Dinelaris says. "I saw the Rachel's sister, Nicki, as a possibility."

The result is a spicing of the drama with a love triangle — Nicki turns out to have feelings for the bodyguard, too — and a twist to the Houston song, "Run to You."

"It's now a duet for Rachel and Nicki," Dinelaris says. "I thought it would be great if both sisters are singing to the same man with equal passion, from two different points of view. It's one of the moments that really pops onstage. And it literally moves the story forward."

Dinelaris drew the line at one thing that would have put the show more solidly in the traditional framework for a musical.

Call it the pre-"Hamilton" season.

The gaga-hit musical will finally reach Baltimore during the Hippodrome Theatre's 2018-2019 season, and subscribers to the theater's 2017-2018 lineup, announced Wednesday, will be first in line for tickets.

"We're not saying you have to subscribe to get tickets...

Call it the pre-"Hamilton" season.

The gaga-hit musical will finally reach Baltimore during the Hippodrome Theatre's 2018-2019 season, and subscribers to the theater's 2017-2018 lineup, announced Wednesday, will be first in line for tickets.

"We're not saying you have to subscribe to get tickets...

"I thought from the beginning that a tap-dancing bodyguard is not someone you would want to protect you," Dinelaris says.

So the character of Frank is not required to boogie or sing onstage. He still gets to put some of the music in this musical, however.

"At the end of Act 1, Frank is drinking at a rock and roll dive bar, the kind with peanuts on the floor," Dinelaris says. "It's karaoke night. I thought I could be coy here. The karaoke country version of 'I Will Always Love You,' the original Dolly Parton version, comes on and Frank starts singing as well as he can. So the first time the audience hears the song they're waiting for, it's badly sung."

Dinelaris is particularly pleased that the musical's title role is being performed on tour by Mills, a Washington , D.C.-born actor best known for his film and television work (he was a regular on "As The World Turns" and "Walker, Texas Ranger"). The two men, now in their mid-40s, were roommates at Barry University in Miami.

Take a much-loved pop culture figure; focus on her path to the top, with its personal joys and setbacks along the way; weave hit songs throughout this backstory — and you've got a friendly musical.

The nostalgia-fueled locomotion known as "Beautiful: The Carole King Musical," which opened three...

Take a much-loved pop culture figure; focus on her path to the top, with its personal joys and setbacks along the way; weave hit songs throughout this backstory — and you've got a friendly musical.

The nostalgia-fueled locomotion known as "Beautiful: The Carole King Musical," which opened three...

"We were the two guys sitting around dreaming about conquering the [entertainment] world," Dinelaris says. "I fell out of touch with Judson for years and years. When I was in L.A. doing 'Birdman,' I decided to hunt him down. I invited him to the Fox Searchlight party after the Oscars to remind me of the people I had once dreamed with. And when the national tour of 'The Bodyguard' was being cast, it occurred to me that Judson would be perfect for it."

Mills says he "couldn't be happier" playing Frank, a role he knew well from the movie version — he's a longtime Costner fan.

"Kevin did a really great job embodying the character," Mills says. "I tried to set his work aside and start with a clean slate, but it was difficult not to embrace some of that for my performance. I get from people all the time, 'You sound like [Costner], you look like him.' That's OK. I could have worse comparisons."

For the Canadian-born Cox, a Grammy Award nominee who has recorded several R&B hits and a Broadway actress whose credits include "Aida" and "Jekyll & Hyde," there's the extra pressure of taking on songs so deeply identified with Houston.

Imitating the celebrated singer, who died in a Beverly Hills hotel room in 2012, was not a requirement for the job.

"Thank God," Cox says. "I'm a big fan of the movie and Whitney Houston. It's one of those movies I feel kind of protective over, being such a huge Whitney fan. I didn't know how the movie would translate into a musical, but I read the script and liked the way they told the story. I never wanted to create a caricature."

In addition to the love triangle highlighted in the music, Cox points to another element that has been beefed up for the stage.

"They expanded on the sense of danger," she says. "The tension is always there. I think people will be surprised at how prevalent the stalker is in the show. Some of the feedback I've heard is, 'Wow, this is a lot more of a thriller.' And I think fans of movie will be surprised to know they included other songs from Whitney's catalog to help tell the story."

Cox sees "The Bodyguard" as more than entertainment.

"It helps to celebrate Whitney Houston," Cox says. "She was our beloved songstress, and this show gives the audience an opportunity to remember the essence of her."