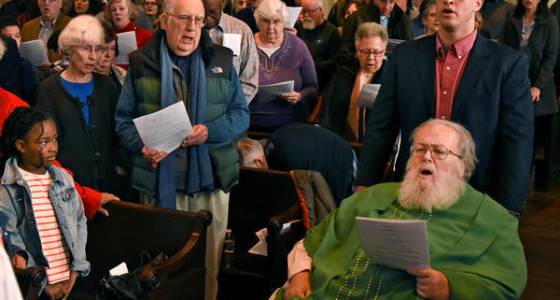 The Rev. Richard T. Lawrence hadn't even begun his first blessing at Mass Sunday morning when applause broke out.

"Good morning," was as far as the 74-year-old pastor got.

The standing-room-only crowd at St. Vincent de Paul Church in Jonestown gave Lawrence — known to many as Dick — several standing ovations during his final service before retirement after 43 years as their pastor.

Lawrence took the applause in stride, his face somewhat shrouded by his long white beard. He spooned incense into the thurible and swung it by its chain before reading Matthew's Gospel from his wheelchair at the pulpit. The well-known reading — in which Jesus tells his disciples, "No one can serve two masters" and warns them to focus on God rather than on earthly concerns — sounded like a reassurance from the pastor to his longtime congregation.

"Don't worry and say, 'What are we to eat? What are we to drink? What are we to wear?'" Lawrence read. "Rather, seek first the kingdom of God, and God's righteousness, and all these things will be given to you besides. Do not worry about tomorrow. Tomorrow will take care of itself."

In his homily, Lawrence said he would have retired years ago if he'd known it would draw such a crowd. He was hospitalized recently after suffering a fall at home. His appearance Sunday followed a five-month absence while he was recovering.

He reminisced a bit about the parish's work over the years, joking that members used to have to bring umbrellas in case it started raining in church, because the roof leaked.

"We put this place back together," he said. "We raised a little money for it. We've done all the things that had to be done. But we've tried not to concentrate on any of it, but rather to concentrate on the kingship of God and God's righteousness. To know our Father, to grow up to be like him — that's all that's really important."

East Baltimore resident Evelyn Anderson may have her house sold against her wishes in a tax sale because of an atypical water bill of $1,300 that she was unable to pay. (Amy Davis/Baltimore Sun video)

East Baltimore resident Evelyn Anderson may have her house sold against her wishes in a tax sale because of an atypical water bill of $1,300 that she was unable to pay. (Amy Davis/Baltimore Sun video)

Under Lawrence, St. Vincent has been devoted to service to the poor, allowing the homeless to sleep in the church's adjacent park, orchestrating giant Friday night dinners for the hungry and helping people transition out of poverty and homelessness. He told church members that his legacy will depend on their continued service work after he leaves.

Lawrence hasn't shied away from controversy, taking a stand in support of Maryland's 2012 ballot referendum that eventually legalized same-sex marriage, despite the Baltimore Archdiocese's strong opposition to the law. At the time, the pastor read Archbishop William E. Lori's letter against the referendum to his congregation, then told his parishioners he hoped one day the church "could come to recognize the total, exclusive and permanent union of gay and lesbian couples as part of the sacrament of matrimony."

The archbishop recognized Lawrence's service to the homeless with the permanent placement of a sculpture known as Homeless Jesus at the church and a letter to the priest and his church on Sunday.

"Long before the election of Pope Francis, Father Lawrence spoke of accompaniment, and he lived it out daily in his priestly ministry, as seen most publicly by his care for the homeless and hungry of Baltimore," Lori wrote. "In his priestly service, he made it a priority to serve others in the image and example of Jesus."

Lori called it "a rare gift" for a priest to have such a long history with his parish.

An aide delivered another congratulatory letter to Lawrence, this one from retired Sen. Barbara A. Mikulski, praising the priest's work as a "powerful example of the necessity of mercy in our lives."

"You are a Baltimore original, a national treasure and brought the Beatitudes to us every day," Mikulski wrote in a handwritten note at the bottom of the typed letter.

Casey, a 30-year St. Vincent parishioner, said he had studied to be a priest himself before leaving the seminary. He said he found what he'd been looking for with Lawrence.

"He's the best preacher I've ever heard," he said.

Another parishioner, Harold "Howdy" Burns, 67, of Lutherville, said he'd been raised Catholic but had stopped attending church, except for the sacraments. That all changed 35 years ago, when he first heard Lawrence preach.

"I wouldn't be Catholic without Dick," he said.