To offset St. Paul's total annual greenhouse gas emissions, the city would have to install 985 wind turbines. Or it could preserve more than 31,086 acres of forests or somehow prevent 575,901 homes from using electricity for a year.But adding a turbine every... 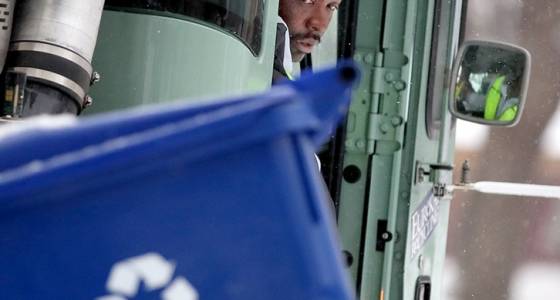 To offset St. Paul's total annual greenhouse gas emissions, the city would have to install 985 wind turbines. Or it could preserve more than 31,086 acres of forests or somehow prevent 575,901 homes from using electricity for a year.

But adding a turbine every few blocks or having hundreds of thousands of people go off the grid probably is not the answer, so the city is launching an effort to come up with a Climate Action Plan that provides a feasible path to reduce pollution.

St. Paul's goal is to be carbon neutral by 2050, completely offsetting emissions so there would be no net release of carbon dioxide into the atmosphere. It is one of 633 communities across the world that agreed, as part of a compact of mayors, to develop plans to address climate change. And while there's no one solution, the combination of cities — plus schools and churches across the state — working toward the goal is encouraging to climatologists.

"I think we're going to see some huge, huge strides made," said Mark Seeley, a climatologist and meteorologist at the University of Minnesota. As recently as a couple of years ago, Seeley said, he would have doubted St. Paul's 2050 goal, but with new technology and local interest, "I wouldn't rule that out as unrealistic."

City staff said they have some ideas of easy ways to reduce emissions, such as adding more LED lighting, but they need residents' suggestions for other ways to become environmentally friendly. Over the next few months, city officials will hold a series of meetings to hear from the public on topics including transportation, waste, natural resources and how climate change affects people's health and city infrastructure.

St. Paul officials aim to finalize the Climate Action Plan by the end of the year.

St. Paul is launching a series of meetings to gather community input for a Climate Action Plan. The first meeting will focus on buildings’ energy use.

St. Paul is launching a series of meetings to gather community input for a Climate Action Plan. The first meeting will focus on buildings’ energy use.

St. Paul city staff spent the past year gathering data to help inform the plan. They found St. Paul's emissions, which are caused by everything from car trips to home energy use to industrial processes, equaled 3.9 million metric tons of carbon dioxide in 2015, not including emissions from power plants.

Transportation was responsible for 37 percent of the emissions, 35 percent came from commercial businesses and 17 percent was emitted by residential properties. The city also looked at Metropolitan Council transportation data, which showed people drive about 5.5 million miles a day in St. Paul.

"We were surprised at how many miles that is," Environmental Policy Director Anne Hunt said.

The city has developed bicycle trails and added light rail but needs a complete strategy to reduce vehicle mileage, she said. That could include employers giving workers incentives to take transit or encouraging telecommuting, she said.

St. Paul already has been chipping away at emissions. The city replaced problematic diesel engines on a tugboat, updated its recycling system to encourage people to reduce waste and will make energy efficiency improvements in at least eight parking ramps this year, Hunt said.

Owners of big buildings in the city that use a lot of energy, such as hospitals and colleges, will be important partners in the years to come, she said.

Hunt would like to see more building owners follow the lead of the Science Museum of Minnesota, which captures and reuses heat the building emits. Hunt also applauded First National Bank Building owners for shifting to more LED lights in 2016.

Xcel Energy started working with the city last year to collect energy usage data and improve building efficiency as part of the company's "Partners in Energy" program, which dovetails with the city's action plan, said John Marshall, the strategic accounts director at Xcel.

"We can come to the table with programs that might help them with that," he said, by improving lighting, heating or air conditioning systems.

Mayor Chris Coleman, who is running for governor, said cities have to step up to tackle climate change. Although the Midwest doesn't have to deal with rising oceans as coastal towns do, Coleman said the impact of climate change is pronounced here.

"Look at this last week. Look at what it's doing to the tourism industry," he said, referring to the warm weather that canceled the Birkebeiner ski race in Wisconsin.

Federal funding for efforts to become carbon neutral is likely not going to be forthcoming, so St. Paul needs to look for low-cost ways to be more efficient and find local partners — like building owners and Xcel Energy — to help make changes, he said.