CANTON, Ohio –When it comes to the Division I boys swimming championship, teams entered with the mindset of finishing second. St. Ignatius did just that Friday night at C.T. Branin Natatorium, scoring 173 points to finish runner-up to state champion... 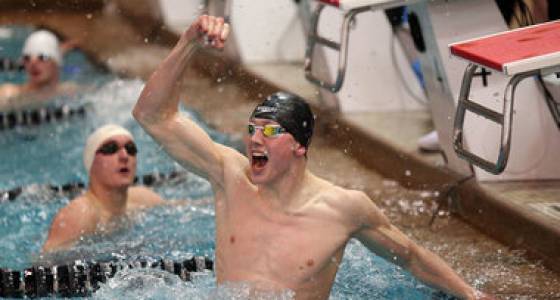 CANTON, Ohio –When it comes to the Division I boys swimming championship, teams entered with the mindset of finishing second. St. Ignatius did just that Friday night at C.T. Branin Natatorium, scoring 173 points to finish runner-up to state champion Cincinnati St. Xavier, which scored 434 points.

“It means the world (to finish second),” St. Ignatius senior Dimitri Simcox said. “We know coming into the meet we aren’t going to beat (St. Xavier), but all of the hard work we have put in, it is so fulfilling. It’s surreal. It’s amazing.”

Here are some of the more notable performances from the boys Division I state championship Friday night:

“I have been waiting a whole year to do it again,” Madej said. “I love this speed, I love everything about it.”

Junior Tyler Doerrer of Green finished sixth with a time of 45.86.

* Madej also finished second in the 50 freestyle after finishing third in the event last season. His time of 20.56 was second only to Nathaniel Mullins of North Canton Hoover.

“I think the nerves just got ahold of me,” Madej said. “I missed my wall and wasn’t as good as this morning.”

Simcox posted a time of 20.83 to finish fourth, and Hudson sophomore Jay Johnson finished sixth at 21.00.

* In the 200 medley relay, the teams from St. Ignatius and Brecksville both finished in the top three. The Wildcats’ team of Simcox, sophomore Nicholas Hong, senior Marcus Hong and junior Cian O’Haimhirgin finished second with a time of 1:33.12.

* Senior Max Gustafson of Shaker Heights finished fifth in the 200 freestyle with a time of 1:40.65.

“That’s the best I have finished so far,” Gustafson said.

Joey Libertin of St. Ignatius and Tyler Doerrer of Green also finished in the top seven, with Libertin (1:41.43) sixth and Doerrer (1:41.53) seventh.

* St. Ignatius also finished second in the final event of the night, the 400 freestyle relay. The Wildcats' time of 3:03.78 was second to St. Xavier’s state-record time of 2:58.13. The team of Simcox, O’Haimhirgin, Libertin and Marcus Hong was 4.53 seconds clear of third-place St. Charles Prep.

The Brecksville team of Chimes, Madej, Colin Charbonneau and Krusinski finished fourth in the event with a time of 3:08.45.

“I feel amazing, I just don’t have the words,” Brooks said. “I was sixth and ninth last year, so to move up to third and second this year means a lot. It’s been a great ride.”

* Marcus Hong of St. Ignatius took home second place in the 100 butterfly with a time of 49.17. He finished second to Cincinnati St. Xavier’s Luke Sobolewski.

“It meant a lot,” Hong said. “A second-place finish for me is great, but it also helps the team in our goal of finishing as state runner-up.”

Gustafson finished fourth with a time of 49.89.

* St. Ignatius took fourth place in the 200 freestyle relay. The team of Simcox, Libertin, John Hessler and Severyn Kushmeliuk finished with a time of 1:25.49, with St. Xavier having a winning time of 1:21.44.

* St. Xavier’s Grant House took home the Performance of the Meet Award with four championships, two individual and two relays. The four titles gave him 13 total for his career, an OHSAA record.

Ryan Isley is a freelancer from Akron.