WASHINGTON – Frustrated by leaks in the Trump administration, the White House cracked down on staffers last week, making them pile their phones on a table to prove they had nothing to hide, Politico reported on Sunday, citing sources.White House spokesman... 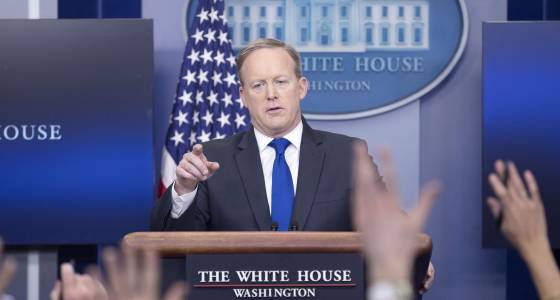 WASHINGTON – Frustrated by leaks in the Trump administration, the White House cracked down on staffers last week, making them pile their phones on a table to prove they had nothing to hide, Politico reported on Sunday, citing sources.

White House spokesman Sean Spicer assembled the group of communication staffers to his office in the West Wing, scolded them about details of private conversations appearing in media reports and made them surrender their phones and other electronic devices to be examined, the website reported.

Spicer sought advice from White House counsel Don McGhan before calling the meeting and carrying out the “phone checks.”

He warned that encrypted messaging apps – such as Confide and Signal – violated the Federal Records Art, sources in the White House meeting told Politico.

Before the meeting at Spicer’s West Wing office, staffers had to empty their electronic devices on a table, Politico reported.

Spicer expressed his frustration with the media finding out about private meetings, and made clear he didn’t want the phone checks to be leaked to the press.

Also last week, the State Department circulated a four-page memo about the dangers of leaks, which soon was leaked to the Washington Post.

The crackdown on leaks is a reaction to President Trump’s growing frustration with information about his Administration freely flowing in the press.

Unlike his business dealings where non-disclosure agreements were common, Trump has been especially irked by the longstanding practice of the press getting a hold of information from within a vast, unwieldy government.

“Russia talk is FAKE NEWS put out by the Dems, and played up by the media, in order to mask the big election defeat and the illegal leaks!,” Trump tweeted Sunday.

Trump’s wrath has centered on the intelligence community releasing information about Trump aides’ contacts with Russian officials. The White House denied reports his campaign had contact with Russia during his campaign.