SpaceX has set its sights on launching two private citizens on a flight around the moon in 2018, which could be the farthest manned mission into space since the Apollo program. It would also be a dramatic expansion of space tourism.The two people already... 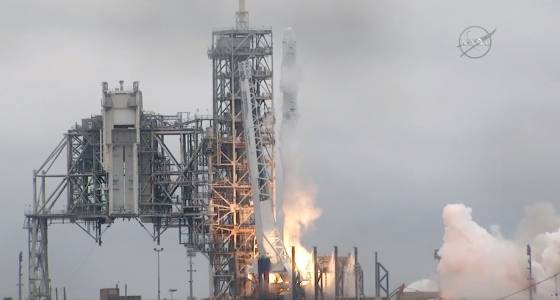 SpaceX has set its sights on launching two private citizens on a flight around the moon in 2018, which could be the farthest manned mission into space since the Apollo program. It would also be a dramatic expansion of space tourism.

The two people already have “paid a significant deposit” for the mission, said SpaceX founder and CEO Elon Musk on Monday. The plan is to launch from Florida, using the historic Complex 39A at Kennedy Space Center, which was used in the Apollo missions.

SpaceX has launched regularly from Florida for years but hasn’t carried people. Space tourism so far has been limited to a trickle of paid passengers, mostly on Russian rockets. NASA’s plans for carrying more private citizens to space were interrupted by the Challenger and Columbia space shuttle disasters.

Musk did not reveal the identities of his customers but said they would have “extensive training” to prepare for the launch, which he said could come near the end of next year. The moon mission could open a new revenue stream for the company, Musk said.

This weekend's scheduled SpaceX rocket launch will be the first on NASA property in five years.

This weekend's scheduled SpaceX rocket launch will be the first on NASA property in five years.

“It’s an exciting time for those that are interested in spaceflight and those just being exposed to it for the first time,” Salonen said.

Musk said he hopes the planned mission will get the world excited about “sending people into deep space again.” He estimated the mission would take a week, with the spacecraft traveling in a “long loop around the moon,” into deep space then back to Earth.

He said NASA would be closely involved in the mission’s planning. SpaceX and United Launch Alliance have been working with NASA on their commercial crew program, which launches satellites and payloads to the International Space Station among other things. Musk said that program would still get first priority.

“NASA always has the right to first priority,” Musk said. “If NASA decides to have the first mission of this nature be an astronaut, of course NASA would take priority.”

“We are clearly on the edge of humankind’s reach into space in a more-democratized way,” said Frank DiBello, president and CEO of Space Florida, the state’s space marketing and economic development group. “It is beyond just the domain of a few operating under a government program. I think you’ll eventually begin to see companies conduct business on and around the lunar surface and, eventually, beyond that.”

But there are some who worry about the bold nature of the new mission. Ray Lugo, director of UCF’s Space Institute, said SpaceX has not had the sustained success necessary to show it can safely launch humans.

“It seems to me to be a risky move,” said Lugo, whose father worked in the space industry during the Apollo missions. “SpaceX is a private company so it’s hard to know how far along they are. But it doesn’t seem like they have done enough yet to demonstrate the capability to launch someone to the moon.”

SpaceX plans to test a new rocket configuration, the Falcon Heavy, and will also be testing a new version of its Dragon space capsule, the Crew Dragon (Dragon Version 2), which is the capsule that would carry the space tourists. The Crew Dragon test flight will be part of the commercial crew program, on a mission to the International Space Station, in automatic mode, without people on board.

Carrying several tons of supplies and scientific experiments, the unpiloted SpaceX Dragon cargo craft arrived at the International Space Station Feb. 22 following its launch atop the SpaceX Falcon 9 rocket Feb. 19 from the refurbished Launch Pad 39-A at the Kennedy Space Center.

Carrying several tons of supplies and scientific experiments, the unpiloted SpaceX Dragon cargo craft arrived at the International Space Station Feb. 22 following its launch atop the SpaceX Falcon 9 rocket Feb. 19 from the refurbished Launch Pad 39-A at the Kennedy Space Center.

SpaceX is currently contracted to perform an average of four Dragon 2 missions to the ISS per year, three carrying cargo and one carrying crew. The company said flying privately-crewed missions, which NASA has encouraged, will lower long-term costs to the government and provide flight reliability history.

Musk said the two who signed up for the mission understand the risks involved with rocket launches. He did not say how much the mission will cost.

“They are entering this with eyes wide open, knowing there is some risk here,” he said of the customers. “They are certainly not naïve. We do what we can to minimize risk, but it’s not zero.”

The company still has work to do to make sure its vehicle can be used for the mission. Some modifications must be made to the Dragon 2 spacecraft, including upgrades that will allow communication from deep space. In addition, the FAA still has to evaluate the capsule as a manned vehicle, Musk said.

The goal is to send a Dragon 2 to the International Space Station without astronauts before the end of this year. Musk said that could be followed about six months later with a manned launch.

The moon orbit mission would then follow six months after that, he said.

Launch Complex 39A recently hosted its first launch since the U.S. shuttle program ended in 2011, an unmanned SpaceX cargo mission.