Southern California has once again won the distinction of having the worst summer smog in the nation but earned praised for its long-term efforts to improve air quality.Such were results of this year’s American Lung Association State of the Air report,... 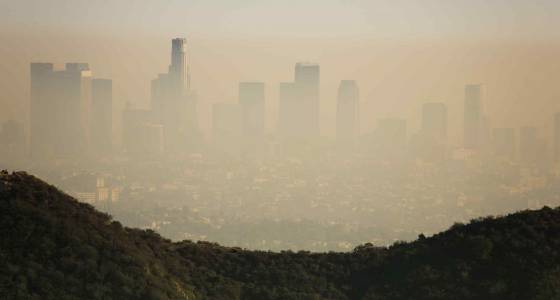 Southern California has once again won the distinction of having the worst summer smog in the nation but earned praised for its long-term efforts to improve air quality.

Such were results of this year’s American Lung Association State of the Air report, a national air pollution analysis.

The good news was that in 2013, 2014, and 2015, 41 million fewer Americans were exposed to unhealthful levels of air pollution, compared to the three-year period that started in 2012.

“We found an improvement in air quality, and we are delighted to see those improvements,” Janice Nolen, the association’s assistant vice president for national policy, said in a telephone briefing with reporters.

Yet Nolen and other clean-air advocates discussed the report with a somber tone.

Air pollution is still “making people sick and cutting lives short,” said the association’s Bonnie Holmes-Gen, who is based in Sacramento. And continuing the air cleanup for Americans living in counties with unhealthful air, including most Californians, may be more difficult in the years to come.

The greater Los Angeles area has the worst ozone problem in the nation, but the number of unhealthful days is on a declining trend, with 2015 the best year so far. However, the number of bad air days went up in 2016, with 116 days failing to meet the federal health standard for ozone, according to state data.

The lung association is concerned that global warming is facilitating the formation of both ozone and fine particle pollution, the two most significant pollutants tracked in the report.

And the political climate also may affect air pollution regulations.

And the Trump administration indefinitely delayed a federal court hearing in which the administration was to defend the health standard. The delay was applauded by business groups, leading to speculation that the president may roll back the standard, which was recommended by a panel of scientists.

And several members of the Republican-controlled Congress, citing economics,  want to roll the back Clean Air Act, which requires the EPA to set health standards and develop regulations to met them.

But the lung association report says that years of air quality improvements show a “need to support and enforce the Clean Air Act to protect the nation from unhealthy air.”

Karen Jakpor, a physician and asthma patient, said air pollution in Riverside, where she lives, and has meant numerous hospitalizations and emergency room visits.  She added that increasing warehouse development has resulted in more big rig truck traffic in Inland Southern California.

But California lawmakers earlier this month agreed to ease diesel truck emissions rules as part of the political horse-trading needed to pass a gas tax hike. The money raised will be used for freeway and other transportation projects.

Diesel soot constitutes about 80 percent of the cancer risk from air pollution, said Dr. Alex Sherriffs, a family physician and member of the California Air Resources Board, who spoke at the press briefing.

“We still must make progress in terms of cleaner engines,” Sherriffs said.