Sonoma County law enforcement leaders are trying to allay fears among immigrants about a looming federal crackdown on illegal immigration, saying their officers don’t investigate or detain people based on their legal status — and local chiefs don’t... 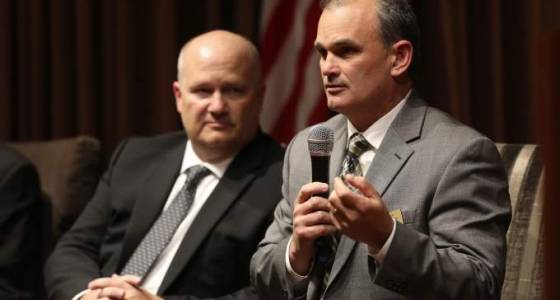 Sonoma County law enforcement leaders are trying to allay fears among immigrants about a looming federal crackdown on illegal immigration, saying their officers don’t investigate or detain people based on their legal status — and local chiefs don’t expect that to change.

At the same time, amid regional and statewide blowback against President Donald Trump’s vow to deport millions of undocumented immigrants, local chiefs are trying to maintain discretion over how they cooperate with federal immigration authorities, citing cases involving serious or violent offenders and other public safety matters.

The shared message from local authorities comes as the Trump administration appears to be gearing up for a wide-scale escalation of federal action against undocumented immigrants. Trump’s Homeland Security secretary, John Kelly, has called for the hiring of 15,000 additional immigration and border agents to carry out the president’s orders. In a memo released Monday, Kelly also articulated a plan to increase his department’s cooperation with local law enforcement by giving police officers and deputies the authority to investigate and detain individuals who are suspected of not having proper documentation.

But local police chiefs and the Sonoma County Sheriff’s Office have no plans to reach out to federal immigration authorities’ to collaborate with that effort.

At the same time, state lawmakers have introduced a bill that would further curb local-federal interaction on law enforcement, limiting the notification that federal agents receive from local jails when undocumented residents are detained.

For federal immigration arrests, the part played by local agencies is limited if they are called upon to help, which is rare.

“We’ll never act as the agent,” said Cmdr. Aaron Johnson, a senior officer with the Rohnert Park Department of Public Safety. “If it’s a fugitive or high-risk individual we’ll provide support, but they (federal agents) run the operation. It’s a road we haven’t crossed in quite some time.”

Current policy in departments throughout Sonoma County calls for their officers to play only a supporting role by directing traffic and ensuring public safety if needed during an action by U.S. Immigration and Customs Enforcement, or ICE. There was no such assistance by local agencies in Sonoma County in 2016, including the county’s two public colleges, according to law enforcement officials.

Yet federal immigration agents are still active throughout the county. In 2016, ICE alerted Santa Rosa police on 11 occasions that it was conducting operations in the city. It notified the Sheriff’s Office 10 times of actions in the unincorporated area.

Other departments in Sonoma County said they were not contacted by ICE regarding activity in their jurisdictions.

Local police chiefs say they would expect to be notified before federal authorities or any other agencies were conducting operations in their cities.

“I’d be shocked if they didn’t let us know,” said Sebastopol Police Chief Jeff Weaver. “When you go into someone else’s jurisdiction you tell them. It’s basic tactics. You want to avoid friendly fire or a standoff between agencies.”