Sonoma County’s airport may need to redraw current expansion plans to accommodate a crush of passengers and the arrival of more airlines, including the possible addition of United Airlines, which is considering restarting daily service to San Francisco... 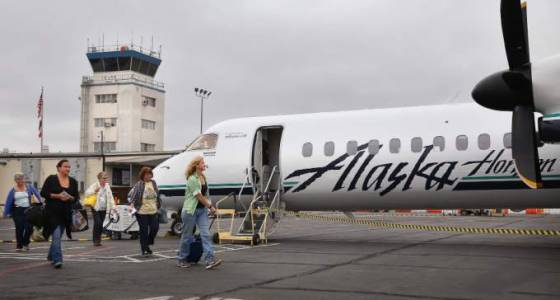 Sonoma County’s airport may need to redraw current expansion plans to accommodate a crush of passengers and the arrival of more airlines, including the possible addition of United Airlines, which is considering restarting daily service to San Francisco this summer, an airport official said.

United, which discontinued daily flights to San Francisco from Sonoma County in 2001, is now weighing whether to resume the service, only this time with a 70-passenger jet and not the smaller turboprops the airline relied upon back in the day.

“They were saying that if it’s going to happen, it would potentially happen this summer,” Jon Stout, manager of the Charles M. Schulz-Sonoma County Airport, said last week.

The 40-minute flights would allow local travelers to avoid the hassle and expense of getting to SFO, where they could connect to destinations worldwide.

Even more tantalizing, United might decide interest in flying to and from Sonoma County is such that the airline might start service directly to its hub in Denver, which has been a long sought goal for local airport officials.

“If that flow is strong enough, that helps justify doing a Denver flight,” Stout said.

A United representative did not immediately respond to a message seeking comment.

The addition of United would further squeeze Snoopy’s home airport, where the terminal at times is a tight fit.

Alaska Airlines offers between seven and nine daily flights out of Sonoma County, depending on the season.

The Sonoma County Board of Supervisors in September approved financing for a $20 million project that called for more than doubling the size of the terminal and the number of parking spaces at the west end of Airport Boulevard.

But Stout on Friday said he’ll return to the board with options to add an additional 9,000 square feet to current terminal expansion plans, bringing the total expansion to 43,000 square feet, or larger than the new Oliver’s Market in Windsor.

Stout said current expansion plans may not be enough to address the need for more space in baggage hold areas and for more bathrooms in passenger waiting areas.

“We’re now having times of the day when there may be three airplanes checking in at once, and that’s where we are running out of space,” Stout said.

He said going to supervisors for direction will push the start of construction on the terminal expansion back by about three months, to late this year. That also would delay the its opening to summer of 2019.

“These are good growing pains to have,” Rabbitt said.

The airport, which receives funding from landing fees, terminal rents, passenger facility charges and other sources not tied to the county’s general fund, has a total budget this year of $5.9 million — nearly $1 million more than two years ago, according to Stout.