Shoving match erupts inside Minneapolis Institute of Art; one involved had look of neo-Nazi

A shoving match broke out in a most unlikely place, the typically serene Minneapolis Institute of Art, where three people who appeared to be neo-Nazis fought with several others in another group of activists, a witness said Sunday.Security guards arrived... 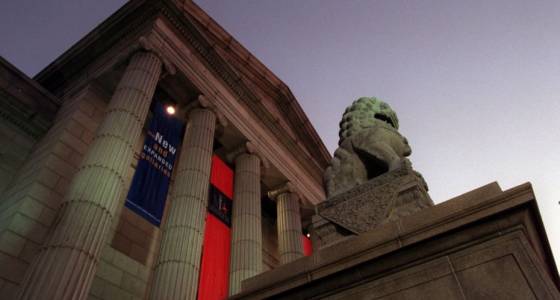 A shoving match broke out in a most unlikely place, the typically serene Minneapolis Institute of Art, where three people who appeared to be neo-Nazis fought with several others in another group of activists, a witness said Sunday.

Security guards arrived at the mayhem late Saturday afternoon on the museum’s third floor, broke up the confrontation and had one of the reputed neo-Nazis pinned to the floor, said museum visitor Will Bildsten.

Institute Director Kaywin Feldman said some of those involved in the incident were among roughly two dozen people staging a protest outside the museum in opposition to anti-immigration sentiment in the United States. They hoisted a banner with slogans in Spanish and English: “Una clase, una lucha — contra fronteras [a class, a struggle — against borders]!” and below that, “Don’t deport our fellow workers.”

When the group said to look like neo-Nazis entered the admission-free museum, several from the protest outside followed, Feldman said.

The adversaries made their way to the third floor amid the 18th-century European art, and that’s where the tension turned physical, the director said. She said one person among the trio was attacked but didn’t want to press charges.

In the 8 or so minutes that the clash lasted, Feldman said, no artwork was damaged.

“Our security did an incredible job disarming the situation and did exactly as they were trained to do,” Feldman said.

Feldman said police were at the museum reviewing video surveillance from inside and outside the building. Police said they would have something to say later Sunday. There was no word yet on whether anyone was arrested or seriously hurt, if at all.

Bildsten said he had just come up the stairs to the third floor, when he saw “a lot of commotion, people arguing and pushing” amid the exhibit.

In one group were three men that Bildsten described as looking like neo-Nazis. He said one of them had a “neo-Nazi” or white nationalist symbol on the back of his jacket.

Bildsten said he heard some in the rival group yelling “you Nazi” and “you fascist.”

“It was a huddle of people pushing and coming close to the art,” Bildsten said, who witnessed 4 to 5 minutes of the incident. “The art is worth a fortune; very large, traditional paintings in that area.”

Several visitors to the institute started yelling at the combatants, Bildsten said.

Once the guards broke up the clash, “The anti-fascists marched off in a line,” he said.