Should the Confederate flag be banned from public schools?

The Orange County Board of Education just rejected a petition to ban the Confederate flag from school grounds. The local NAACP chapter made the request after students, parents, and school employees reported the flag appearing increasingly on school... 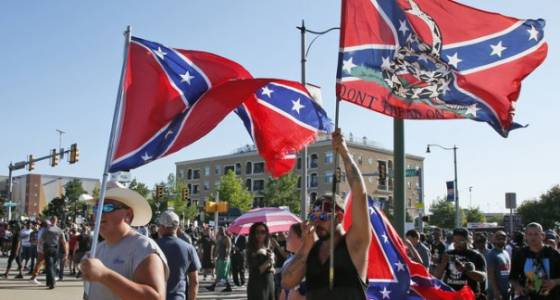 The Orange County Board of Education just rejected a petition to ban the Confederate flag from school grounds. The local NAACP chapter made the request after students, parents, and school employees reported the flag appearing increasingly on school grounds, accompanied by racial harassment. Critics say the flag is a symbol of slavery and white supremacy. Others say the flag stands for "heritage, not hate" -- and regardless of its symbolism, displaying it is a free speech right. What do you think?

After Confederate flag brandisher Dylann Roof murdered nine black churchgoers in South Carolina, activist Bree Newsome climbed the South Carolina Statehouse and took the flag down. Law professor Kareem U. Crayton argued that regardless of the intentions of those who display it, the Confederate flag has become a trademark for racism:

We can all respect that some people do not view the flag that way. But the flag has also become inextricably associated with ideologies that most American should find disgusting.  The Tylt

Some proponents of the Confederate flag acknowledge its painful symbolism for black Americans, but argue that for them it does not symbolize racism or white supremacy:

It is obvious that some racists have appropriated and desecrated the Confederate battle flag for their pathetic causes, but those hateful folks also commonly display the Christian cross and the American flag. Should these symbols be seen as racist too? Perceptions of the flag depend upon context. The Tylt

When white supremacist murderers proudly pose with your flag? Maybe it's time to find another symbol of Southern heritage.

But even if people are displaying the flag is an intentional symbol of racism, is that enough reason to ban it? In America, people are allowed to hold racist views. Even Nazi-style swastikas are protected by the First Amendment.

remember that the ACLU has also defended and fought for neo nazis and the KKK's right to free speech, the confederate flag, etc.

Nearly all cases have upheld such restrictions...because they concluded that there was enough evidence -- based on the schools' or neighboring schools' concrete recent experiences -- that the display of the flag was likely to materially disrupt schoolwork, by exacerbating racial hostilities and thus leading to fights and similar disruptions.

Matthew Yglesias argues that condoning the flag in schools and government buildings sends the wrong message.

But symbols -- like words -- carry meanings that stand independently of any individual person's subjective intentions. And in this case, the symbols' meaning is extremely clear -- lawless violence in pursuit of white supremacy is not necessarily wrong and may at times be worthy of celebration.

But even some who oppose the symbolism and meaning of the flag argue it should not be banned, and say students have a right to express offensive views.