SAN JOSE — Tomas Hertl scored the tiebreaking goal with 1:24 remaining and the San Jose Sharks beat the Toronto Maple Leafs for the ninth straight time, 3-1 on Tuesday night.Patrick Marleau started the winning play when he skated in alone on three defenders.... 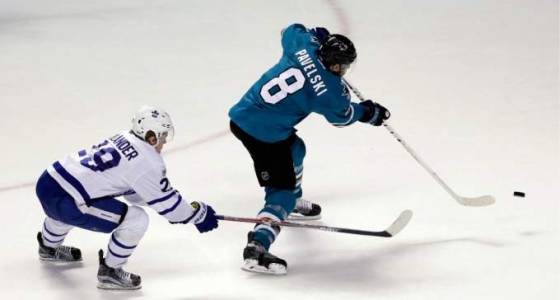 Patrick Marleau started the winning play when he skated in alone on three defenders. Marleau fed Hertl, who then beat Frederik Andersen with a quick shot to the short side for his eighth goal of the season.

Rookie Auston Matthews scored his 31st goal for the Maple Leafs to start a crucial three-game California swing. Toronto has a one-point lead over Florida and the Islanders for the final playoff spot in the Eastern Conference.

San Jose made news off the ice as well, announcing a trade during the second intermission to acquire forward Jannik Hansen from Vancouver for prospect Nikolay Goldobin and a conditional draft pick. The trade deadline in Wednesday.

The Sharks had the better of the chances in a scoreless first period, but Andersen stopped all 13 shots he faced, including Joel Ward all alone from in close on a power play.

The Leafs then used their top-ranked power play to strike first in the second. With Justin Braun in the box, Toronto capitalized on a missed hip check by Brent Burns on a zone entry by William Nylander. Josh Leivo then slid the loose puck to Matthews in the slot, and he beat Jones to make it 1-0.

The Sharks tied it later in the period when Kevin Labanc set up Dillon for a slap shot from the top of the circle for his second goal of the season.

The game stayed there headed to the third only because Mitch Marner hit the post in the final minute with Toronto on the power play.

NOTES: Burns also got an assist on Hertl's goal, giving him 66 points on the season. ... Marner returned to the lineup after missing five games with an apparent right shoulder injury. ... F Brian Boyle made his debut for the Leafs, a day after being acquired in a trade from Tampa Bay.