VANCOUVER, British Columbia — Martin Jones recorded 35 saves as the San Jose Sharks beat the Vancouver Canucks 4-1 on Saturday night.Jones stood out while his team struggled to handle a Canucks squad battling an outbreak of the mumps. The Canucks outshot... 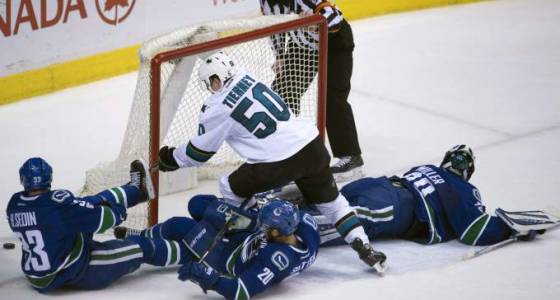 Jones stood out while his team struggled to handle a Canucks squad battling an outbreak of the mumps. The Canucks outshot the Sharks 36-26 but capitalized on the misfortune of Vancouver netminder Ryan Miller.

The Sharks (36-18-7) moved five points ahead of Edmonton and Anaheim in the race for first place in the Pacific Division. The Canucks (26-29-6) suffered their ninth loss in the past 12 games.

Daniel Sedin tallied for the Canucks. Miller, who had a bad night and was not helped by the Vancouver defense, stopped 22 shots.

Both teams were playing their first game following coincidental league-mandated five-day breaks. The Canucks were missing five regulars — three defensemen and two forwards —after the mumps spread through their dressing room.

But the hosts still outshot the Sharks 14-8 in a scoreless first period. In the early going, Jones set the tone for his night by robbing Brandon Sutter as he cut underneath the face-off circle and tried to catch the goaltender going the other way.

Hertl opened the scoring 3:31 into the second period as he banged Chris Tierney’s pass into an empty net with Miller caught out of position. Miller had stopped Joel Ward on a rush from Vancouver’s end, but the puck squeezed past the Canucks goaltender and his post and he could not retrieve it. Ward caught a break as Daniel Sedin failed to check him while heading to the Canucks bench.

Daniel Sedin beat Jones with a shot to the short side at 12:02 of the second. The goal resulted as a Brent Burns clearing attempt was blocked by Henrik Sedin and he quickly sent the puck to his twin brother. The Sharks temporarily lost center Melker Karlsson with slightly more than six minutes left in the middle frame after he was nailed into the side boards near the teams’ benches by Vancouver’s Joseph Labate.

Micheal Haley went after Labate and drew a roughing penalty, but Jones stoned the Canucks on the power play again. Marleau gave the Sharks a 2-1 lead in the final minute of the second period as he stuffed in a back-door pass from David Schlemko with Miller caught out of position again. The Sharks led despite being outshot 16-8 in the second and 30-16 over the first 40 minutes.

Karlsson returned in the third period and watched as Brenden Dillon sought retribution on Labate about two minutes in.

After minimal contact and a brief discussion, Dillon and Labate waged a spirited fight as officials allowed them to go at each other.

Boedker increased the Sharks’ lead to 3-1 at 11:31 of the third as he stole the puck from Canucks defenseman Ben Hutton outside the San Jose blue line and then raced down the ice and beat Miller with a high shot. Couture rounded out the scoring with 5:40 left in the game on the Sharks’ only power play.