SHAKER HEIGHTS, Ohio - First came the Calder Cup. Then the NBA title. Next up for Cleveland, potentially: The Orchestra Cup, first prize in the 2017 National Orchestra Championships. Only this elite race March 4 at Lincoln Center in New York doesn't involve... 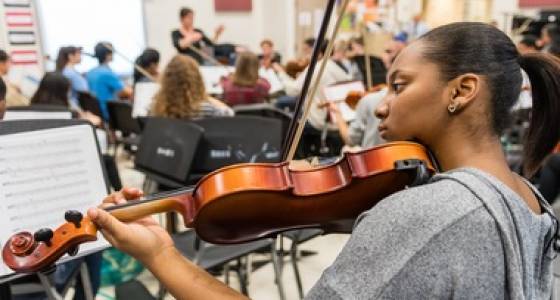 Next up for Cleveland, potentially: The Orchestra Cup, first prize in the 2017 National Orchestra Championships.

Only this elite race March 4 at Lincoln Center in New York doesn't involve the Cleveland Orchestra or any other professional ensemble. This is an event for high school groups, and the team to root for this year is the Shaker Heights High School Chamber Orchestra.

The honor is twofold, no matter how the orchestra fares in a 20-minute public performance at Alice Tully Hall.

Even if it doesn't win, the group can take pride in being both one of only 10 school orchestras nationwide selected for the contest and the first Shaker Heights music group in recent memory to compete at the national level.

What's more, it can do so as a truly diverse bunch, a group composed of players from a wide range of musical backgrounds. Some members have been taking lessons most of their lives. Others only took up music recently, when required to do so in middle school, and have yet to take a private lesson.

"It's big part of my philosophy that music is for everybody," Jelen said. "Culturally, the music that we play is relevant to everyone.

"That's why this competition is so validating. They've been performing at such a high level for such a long time."

In true Cleveland fashion, and to quote Cleveland Cavaliers star LeBron James, nothing on Shaker's path to Lincoln Center was given. Every step of the journey was earned.

The group's berth in the contest? An exclusive invitation. "All of a sudden, it just happened," said violinist Maverick Wilson, a senior. "It let us know that we, too, deserve to be on that stage."

The group's entry fee and travel costs - nearly $700 apiece for 48 of its 55 members? All of it covered by fundraising. Not a single student will miss the trip for financial reasons. Most of those not going are staying behind to prepare for a Latin competition.

Where, in many cities, music tends to be the first program cut to save money, in Shaker, "There's a deep understanding of music's value," Jelen explained. "Families here appreciate all that playing in an orchestra does for you."

So do their fellow students, apparently. Older adults may recall the days when being a musician or playing in an orchestra were viewed as negatives, hobbies for social outcasts.

Today it's just the opposite. In the Shaker Heights system, "You're a nerd if you don't do music, said Chamber Orchestra violist Janayia Rodgers. "Now music is the cool thing to do."

Another thing that didn't come easily was the group's competition piece. Many players take part in the school's chamber-music program and study privately, but for the orchestra as a whole, their adaptation of Shostakovich's String Quartet No. 8 - a study in musical angst - still represents a significant technical challenge.

"I had to build my way up," said violinist Wilson, recalling every lesson or clinic offered by Shaker Heights as "an opportunity to better myself."

Jelen hasn't been the group's only teacher, either. Just as elite athletes hire coaches to train them for competition, do did the Shaker students bring in several outside conductors to prepare them for the orchestra cup.

Among their guests were members of the Cavani String Quartet and instructors from Baldwin Wallace University and the University of Akron.

"It really made us communicate more," said violinist Andrew Maytin of working with guest conductors. "It forced us to look around at other people."

The chance to play at Lincoln Center and be judged by professionals is one thing. Even cooler, though, for many: The prospect of visiting New York City and experiencing other great orchestras.

In addition to the competition itself, the Shaker students plan to take a bite out of the Big Apple with a trip to the Museum of Modern Art, a river cruise, and a performance at Carnegie Hall by the St. Petersburg Philharmonic Orchestra.

Best of all, of course, would be to bring home the cup.

Jelen and her students said they view the competition primarily as a learning opportunity and are honored simply to have been invited. Still, they're not heading to New York without ambition.

"We have that competitive drive," Rodgers said. "Of course we want to win."