Opening a new front in the war against big pharma, Sen. Bernie Sanders and a slew of Democratic colleagues introduced a bill Tuesday to allow commercial importation of drugs from Canada.The appeal is obvious; through cheap imported drugs, the U.S. would be... 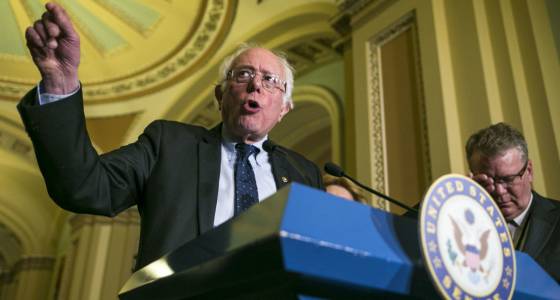 Opening a new front in the war against big pharma, Sen. Bernie Sanders and a slew of Democratic colleagues introduced a bill Tuesday to allow commercial importation of drugs from Canada.

The appeal is obvious; through cheap imported drugs, the U.S. would be able to take advantage of the government levers and regulation that other countries have used to bring down pharmaceutical prices. It’s a far more politically palatable way to attack the problem of soaring drug prices than opening up an even more contentious fight over whether the U.S. government should meddle directly in pricing — and it has had wide popular and bipartisan support, including from Hillary Clinton and U.S. President Donald Trump during the presidential campaign.

A drug importation amendment was previously advanced during the budget resolution vote in the Senate in January. It was rejected, with 13 Democrats voting against the measure. Four of those who voted against the amendment signed on as co-sponsors of the bill.

In an afternoon press conference unveiling the bill, Democratic and independent lawmakers threw down the gauntlet, calling on Trump — who has repeatedly said that he will do something to reign in rising drug prices — to support their effort.

The bill was immediately criticized by pharmaceutical industry’s trade group, arguing that the policy could cause patient harm if bogus and possibly unsafe drugs make it into the market.

“The bill lacks sufficient safety controls, would exacerbate threats to public health from counterfeit, adulterated or diverted medicines, and increase the burden on law enforcement to prevent unregulated medicines and other dangerous products from harming consumers,” said Nicole Longo, a spokeswoman for PhRMA, the trade group for the drug industry. “An importation scheme would open new avenues for unscrupulous organizations and individuals to take advantage of American patients.”

Partnership for Safe Medicines, a coalition that includes PhRMA and many public health groups, said in a letter that the proposal would “undermine nearly two decades of drug safety and policy.”

But supporters of the law argue that the spectre of patient harm is a boogeyman, trotted out by an industry trying to protect its business model. The bill has safety protections embedded in it, some of which were what convinced Democrats who voted against a previous importation proposal to sign on in support. For example, it requires exporters to be certified and requires the drugs sold to have been manufactured in facilities inspected by the FDA. The proposed law includes penalties, of up to 10 years in prison and a $250,000 (U.S.) fine against people who sell counterfeit or adulterated products.

“There is no argument. The drugs that come into this country must be 100 per cent safe, and we will do that. We will not tolerate rogue outfits,” Sanders said at the press conference.

Pharmaceutical companies have also argued that the conversation about high prices is the wrong one to be having, pointing out that the list prices that usually attract politicians’ ire do not represent a price that almost anyone pays. Major companies are embracing measures such as limiting price hikes to less than 10 per cent a year and there’s a growing effort to redirect pricing critiques to a discussion of the value that medicines provide. This week, Johnson & Johnson published a transparency report disclosing that while the average list price across all its products went up 8.5 per cent list year, the increase after rebates was 3.5 per cent.

Allan Coukell, senior director of health programs at the Pew Charitable Trusts, said that importing drugs could give patients access to lower-priced medications, and that policy could exert downward pressure on U.S. prices — if it occurred at a broad enough scale. But he noted that past analyses of importation proposals suggest small savings overall and that those benefits must be weighed against the way importation could undermine supply chain protections — such as individual serial numbers on all U.S. drugs — intended to keep counterfeits out of the U.S. market.

The other question is how well the solution would work in the long term as a solution to high drug prices, if implemented.

“Obviously, manufacturers respond to these sorts of threats of importation by trying to raise prices in the countries that could become sources of export,” said Patricia Danzon, a professor emeritus at the Wharton School at the University of Pennsylvania. And if they can’t get the country, such as Canada, to agree to a higher price, they may limit the supply of the drug or provide access to new medications later.

The bill prohibits drugmakers from restricting, prohibiting or delaying the importation of drugs under the program unless there is a shortage. It says it would be unlawful to charge a higher price for a drug if it’s sold to a foreign entity that plans to sell it back to the U.S. But Coukell said it was difficult to know how that would play out in the real world.

If countries have a limited supply of a drug, Danzon argued, they could be tempted to divert what they have to the United States, where patients will pay higher prices than at home — creating shortages among their own citizens.

“It’s a very beg-your-neighbour approach, in which, rather than solving our problem to fix our high prices, we’re in a rather haphazard way exporting it to other countries,” Danzon said.

Joshua Sharfstein, a former deputy commissioner at the Food and Drug Administration now at the Johns Hopkins Bloomberg School of Public Health said that he understands the rationale for the proposal but thinks that importation is not an optimal solution.

“The rising prices for drugs are not sustainable in this country, and there’s a major concern for affordability and that’s why people are seriously considering these sorts of solutions,” Sharfstein said. “But I’d like to think we could have a more rational approach that doesn’t require what is, in effect, a massive workaround.”