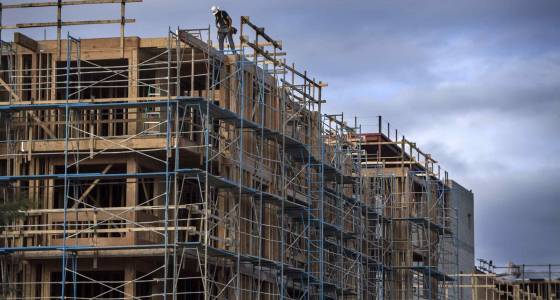 And O.C. stood apart from neighboring Southern California counties, where construction and sales either grew at a more lackluster pace or declined.

Orange County developers took out 12,157 building permits in 2016, the most since 2000, according to Construction Industry Research Board data.

The last time Orange County saw this many homes being built, Hillary Clinton still was in the White House – as first lady. John Paul II still was the pope. The 9/11 terrorist attacks still hadn’t occurred. And iPods, iPhones and YouTube hadn’t been invented yet.

Figures from the CIRB report, which tracks building permits in the state, also showed:

–Of the 12,000-plus new homes built, 7,962 were either condos or apartments. Although CIRB doesn’t track how many were for-sale units and how many were rentals, apartments most likely dominated since CoStar figures show there were 10,000 apartments under construction by the end of last year.

–For-sale housing was booming as well. Single-family permits (the best indicator of for-sale activity) totaled 4,195 last year, the most in 12 years.

–Renters and buyers were flocking to absorb all that new product. Even though thousands of new apartments came on the market last year, vacancy rates remained below 4 percent. In addition, Orange County builders sold 4,690 new homes in 2016, CoreLogic figures show. That’s the highest new-home sales tally in a decade.

“It’s based on a shortfall in housing stock, both resale and new, in the Orange County and L.A. market,” said Bill Holford, president of Olson Communities, a Seal Beach-based homebuilder. “There’s such a shortfall. … People are clamoring for those (new home) communities.”

Other Southern California counties failed to see a significant increase in new housing such an increase or had a decrease.

In Orange County, for example, building permits were up 12 percent from 2015 levels.

Riverside County was the only other in the region to see construction rise, with permits up 5 percent. Construction permits, meanwhile, fell 11 percent in Los Angeles County and 4 percent in San Bernardino County. In the region as a whole, building dropped 3 percent.

New home centers also were busier at Orange County developments where sales increased 29 percent in Orange County, according to CoreLogic. The gain for the rest of Southern California was 8.5 percent.

This is a reversal of building patterns seen during the pre-recession housing boom, when most new home construction was in the Inland Empire.

“This is an anomalous period for Orange County,” said housing consultant Mark Boud, president of San Clemente-based Real Estate Economics. “Beyond the next few years, we may very well never be able to bring on this level of supply again in Orange County.”

Experts summed up their answers in two words: Supply and demand. Both are up, boosting Orange County home sales.

“The long-term ratio is 1.4 jobs-to-1.0 home, so demand is about two times higher than supply,” Boud said.

In response, developers have been busy.

Orange County is home to four of the largest 19 master-planned communities in the country, and all of them have accelerated their construction pace, said Irvine-based housing consultant John Burns.

“The two biggest landowners, Irvine Co. and Rancho Mission Viejo, decided to ramp up the volumes dramatically,” Burns said. “At the same time, the (Great Park Neighborhoods) in Irvine and Baker Ranch in Lake Forest offered more homes for sale than ever before.”

Sales nearly doubled to 535 transactions at the Great Park Neighborhoods, the ninth-highest tally among the nation’s 50 top-selling master-planned communities, according to a ranking by Burn’s firm, John Burns Real Estate Consulting.

“Demand in Orange County is extraordinary,” said Dan Kelly, a senior vice president with Rancho Mission Viejo, the South County land holding firm behind the development of Sendero and Esencia and, in years past, Mission Viejo and Ladera Ranch. “ … The community has come together (at Rancho Mission Viejo) far more rapidly than we ever thought it would.”

Los Angeles County and the Inland Empire, on the other hand, “do not have any notable master plans,” Burns said. There is plenty of demand there, he said, “just no supply.”

In the Inland Empire, commuter headaches caused by infrastructure improvements along the 91, 15 and 60 freeways are hampering demand, as are tighter mortgage qualification standards, he added.

“Once these infrastructural improvements are completed, more housing demand will likely flow to the Inland Empire,” Boud said. “But for now, it remains stymied.”

Orange County, on the other hand, remains extremely attractive to homebuyers, Rancho Mission Viejo’s Kelly said. And given the limited number of existing homes for sale, more buyers are turning to the new home market.

New homes offer better architecture, more natural lighting and wiring that can handle all the electronics found in modern homes, such as electric-vehicle charging stations, he said.

“You add it all up, it’s a very compelling story,” Kelly said. “I would say the builders are going, not at the hyper-frenzied pace of the (boom), but at a substantial and steady pace that is very strong.”