COLLEGE PARK, MD. – First, there was the trophy presentation to Maryland for finishing in first place in the Big Ten.Then, seniors Brionna Jones and Shatori Walker-Kimbrough had their jersey numbers lifted to the rafters of the arena in recognition... 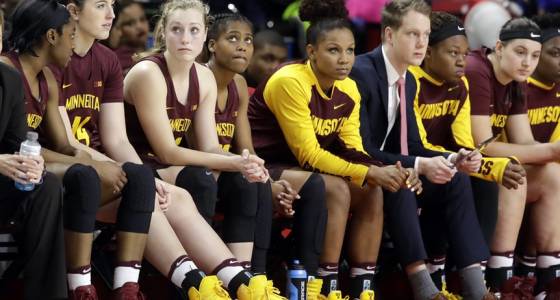 COLLEGE PARK, MD. – First, there was the trophy presentation to Maryland for finishing in first place in the Big Ten.

Then, seniors Brionna Jones and Shatori Walker-Kimbrough had their jersey numbers lifted to the rafters of the arena in recognition of their outstanding play over the past four years.

“To have all that happen on the same day, you couldn’t ask for a better way to end the regular season,” Jones said after No. 2 Maryland romped past the Gophers 93-60 on Sunday in the final regular-season finale for both teams.

The Gophers will finish the Big Ten season in the 10th place and play their first game in the conference tournament on Thursday in Indianapolis against seventh-seeded Penn State.

Carlie Wagner, the Gophers’ leading scorer this season, was held to only five points, all of them in the second half after the game was long decided. She missed all but two of her 13 shots from the field.

Seeing their numbers on banners hanging from the roof was special for Jones and Walker-Kimbrough, but the duo took more delight in finishing no worse than tied atop the Big Ten standings.

“Being that the Big Ten regular season title was one of our goals, it’s really cool to see everything play out,” Walker-Kimbrough said. “This ride is far from over, but we’re 1-for-1 right now.”

Maryland has won at least a share of the conference regular-season title in each of its three years in the Big Ten. This week, the Terrapins will set out to win the conference tournament for the third year in a row.

Maryland will enter as the second seed as Ohio State defeated Rutgers later Sunday. Although the Terrapins will be recognized as the regular season co-champions, the Buckeyes are the No. 1 seed by virtue of their 98-87 victory over Maryland on Monday.

None of that took the luster off the trophy presentation and the banner-raising ceremony.

“Obviously, I’m extremely proud of our team, and to be able to send our seniors on such an incredible day,” said Maryland coach Brenda Frese, the former Gophers coach. “I’m proud of the consistency factor, when you talk about back-to-back-to-back regular season titles.

Eager to rebound from its second loss of the season and send their seniors out in style, the Terps wasted little time taking control against the struggling Gophers.

“We knew we were coming into a hostile environment, no question,” Gophers coach Marlene Stollings said.

Maryland made 10 of 14 shots in the first quarter in building a 26-12 lead, upped the margin to 27 points with three minutes left in the first half and cruised to the finish.

“That first quarter, we dug quite a hole,” Stollings said.

Jones scored 16 points before halftime and Walker-Kimbrough added 15 to stake Maryland to a 51-30 lead. Walker-Kimbrough had eight points and two assists in the third quarter, enabling the Terrapins to bring a 27-point cushion into the final period.

The fourth quarter was a prelude to the postgame ceremony for Jones — now the third-leading rebounder in school history with 1,139 -- and Walker-Kimbrough, who’s fifth on the Maryland career scoring list with 2,036 points.

Both left to a standing ovation with 3:46 left.

“These guys, they work so hard that they make it look so easy,” Frese said. “The thing is, it’s not easy.” PATRICK SEMANSKY &#x2022; Associated Press Maryland head coach Brenda Frese claps after a play in the second half of an NCAA college basketball game against Minnesota, Sunday, Feb. 26, 2017, in College Park, Md. (AP Photo/Patrick Semansky)