Seattle wakes up to snow 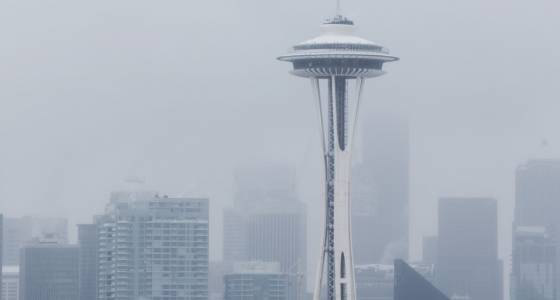 A snowy Space Needle stands out from Seattle's skyline after a few inches fell in the early hours of Monday, Feb. 6, 2017.

A snowy Space Needle stands out from Seattle's skyline after a few inches fell in the early hours of Monday, Feb. 6, 2017.

Seattleites woke up to a bit a snow Monday morning.

The National Weather Service reported that snow was falling around 6:30 a.m. across the city in West Seattle, Ballard, North Seattle, and the University of Washington area.

The weather service reports that the snow is heavy enough that some temporary accumulations will occur through 7:30 a.m. Any snow that falls will quickly melt off this morning as temperatures are above freezing.

Temperatures are expected to rise into upper 30s this afternoon and the snow will turn into showers.

Flakes were also falling north in Mill Creek and Cathcart, which saw accumulations up to a quarter of an inch. Snow is sticking on the roads in those areas.