CLEVELAND, Ohio – The boys basketball postseason begins this week with sectional games as part of district tournaments. Here is a preview of each Division II district tournament in the cleveland.com coverage area. Click on blue links for more detail... 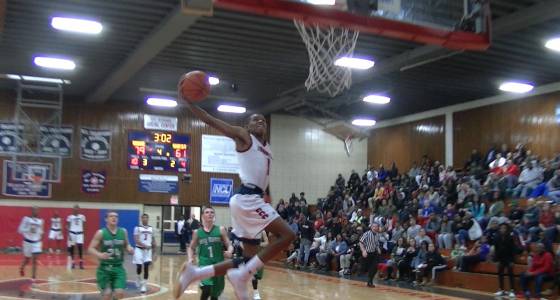 Click on blue links for more detail of a subject.

Who wins the Ashtabula District?

Favorite: Lake Catholic has the size (two 6-foot-5 forwards) and seasoning (from the North Coast League) to live up to its top seed in this district. The Cougars’ potential road to Canton includes Shaw and Hawken on its side of the bracket.

Dark horse: Hawken and Shaw, having to potentially face Lake Catholic early, gives them underdog status. Neither team is short on talent, and Shaw played through a Lake Erie League schedule that gives them conditioning unlike most. Collinwood also could be upset-minded as an 11-seed with 5-9 junior guard Va'shonne Hemmingway and Geno Taylor leading as a high-scoring tandem.

G’Warren Douglas, Shaw: Douglas is a leaper, and the 6-6 senior forward lives up to his nickname “Tree.”

Luke Frazier, Lake Catholic: Another freshman at Lake Catholic, this 6-1 point guard has a bright future with the Cougars. But that future appears to already be here — coach Matt Moran told the News-Herald this season, "It's a learning experience, but they're a varsity basketball team" — and a No. 1 seed, too.

Shaw pushed Lake Catholic earlier this season before falling by three points. If they meet up in a sectional final March 3 at Lake Catholic, it could be one of the best No. 1 seed vs. eighth in the area regardless of division.

Who wins the Canton District?

Favorite: STVM has won 11 of 12 games entering the district tournament. The stretch follows a 100-62 loss at Trotwood-Madison, a team that could reach Columbus.

Dark horse: Coventry reached last year’s district final against STVM and this time around is the lone team to beat Woodridge in the Portage Trail Conference.

Jayvon Graves, STVM: Graves is playing as well as anyone to close the regular season. The 6-2 senior guard, headed to Buffalo next season, plays above the rim but knocked down a last-second shot Feb. 17 to shock Massillon Jackson. He scored 32 that night and followed with 31 to help STVM beat North Canton Hoover.

D.J. Hancock, Alliance: This 6-0 senior point guard will push the tempo for a talented third seed that could run into the top-seeded Irish in the district semifinals. The Aviators won their second straight conference title.

Micah Wallace, Coventry: Get to know the 6-2 sophomore guard, who led the Comets’ upset earlier this season against Woodridge.

The early game to watch is Kenmore at Coventry in the sectional finals. STVM’s path includes the two lowest seeds before a potential matchup with third-seeded Alliance in the district semifinals.

Who wins the North Ridgeville District?

Favorite: Holy Name has already improved by 11 wins from last year. Junior guard Dwayne Cohill has led the way for a four-guard attack with senior Malique Burton inside. The Green Wave shared the Great Lakes Conference with Elyria Catholic and own two victories against second-seeded Bay, last year’s district champion.

Dwayne Cohill, Holy Name: A 6-1 junior point guard, Cohill has had his share of big games and found ways to impact ones when he didn’t have scoring numbers. Coach Jeff Huber said earlier this season he liked Cohill’s maturation, and schools such as Ohio State and Northwestern to West Virginia have made scholarship offers. Cohill is averaging 22.9 points 6.9 rebounds and 3.3 assists, which helps open space for shooters Sean Hickey, Nick Opincar and Brandon Styers.

Luke Howes, Fairview: A freshman point guard, Howes has settled in for the Warriors. One of his biggest games? A 24-point performance that nearly rallied Fairview in a one-point loss to Patriot Athletic Conference power Oberlin.

Jack Jelen, Bay: A 6-0 senior point guard, Jelen was thought to be lost for the season because of a football injury. He returned in February and should give the Rockets a boost with sophomore Erik Painter in the backcourt.

Deuce Martin, Clearview: Clippers coach John Szalay said Martin isn’t the same player he was a year ago, which they needed to repeat as Patriot Athletic Conference Stripes Division champions. He grew into a 6-2 senior guard, worked on his balance and now “makes it look easy,” as Szalay said. See Martin’s 33-point game against Oberlin to win the PAC title as an example. He is averaging 19.8 points.

One of the area’s better sectional finals will be fourth-seeded Clearview at No. 3 Buckeye on March 3. This is a rematch from their PAC crossover on Feb. 14 that Clearview won at home, 76-67. They switch venues in a rematch of PAC division champs.

Their side of the North Ridgeville bracket includes Bay and sixth-seeded Keystone. No. 1 Holy Name will play an opener vs. Cloverleaf with No. 9 Rocky River waiting in the wings. Padua has a bye awaiting the Fairview-Firelands winner.

Who wins the Stow District?

Favorite: Benedictine’s recent push of St. Ignatius, the No. 1-ranked team in the cleveland.com Top 25, came without starting junior guard Chris Jefferson in an 81-80 overtime loss. The Bengals won this tournament last year behind point guard Justin Layne and a powerful inside presence with Justin Sylver. The guard play is marked by a suffocating defensive philosophy, and the inside presence is still strong with 6-5 senior Marlon Moore flanked by a pair of bigs in the rotation.

Dark horse: Cuyahoga Valley Christian Academy swept through the Principals Athletic Conference with a grind-it-out style and enters the postseason on a nine-game win streak. If CVCA gets past Streetsboro, No. 2-seeded Woodridge awaits in a sectional final. Junior guard Mason Lydic and the Bulldogs bring a 21-1 record into the tournament.

Jordan Fabry, Crestwood: A 6-3 senior guard, Fabry is Crestwood’s all-time leading scorer and rebounder. He is averaging 24.0 points and 9.6 rebounds this season. The Red Devils will open with Chagrin Falls. The winner visits Central Catholic.

Marlon Moore, Benedictine: A 6-5 senior, Moore can clean up on the glass while the defense in front of him creates havoc. Benedictine has used him more on the perimeter this season, but his size sets him apart on the Bengals.

Pete Nance, Revere: The Minutemen open with a sectional road game at No. 4 East Tech, and it could be one of the top games in this tournament. Nance, a 6-8 junior forward with offers from Florida and Tennessee, is averaging 17.0 points, 12.0 rebounds and 4.0 blocks.

Miryne Thomas, Central Catholic: Like Moore, Thomas is the big man on a guard heavy squad. This 6-7 senior is headed to the University of Maryland East Shore and has expanded his game — with an outside shot that complements his rebounding, shot-blocking and play above the rim. Thomas averaged a team-best 17.4 points with 6.7 rebounds and 1.4 blocks.

Isaiah Washington, East Tech: Along with senior wing Tyshaun Howard, the Scarabs could have the best one-two scoring punch of this tournament. Washington came to East Tech from Rhodes, sat out the first half of the season and led a run to the school’s fourth straight Senate League crown. The 5-10 senior point guard averaged 24.0 points.

A matchup to watch in the first round is No. 9 Revere at No. 4 East Tech. The winner faces 11th-seeded University School in the sectional finals, but this opener could be the game of the night Feb. 28.

The top four seeds of this tournament are spread throughout the bracket evenly, and top-seeded Benedictine plays host to No. 12 Ravenna before a potential rematch with Orange — they met in last year’s district semifinals. If they meet, it means Benedictine coach Rob Stricula matches wits with Orange’s Derrick Zeigler. The two previously shared sidelines on the same staff.

The Lions have reached this point grinding to a share of the Chagrin Valley Conference Chagrin Division title without standout Jaylan Hewitt. Then the Lions lost another senior guard in Jordan Thompson, who had picked up the scoring with Jalen Warren. Orange has relied on Warren, the leading scorer at 19.6 per game, and point guard Randy Crosby to carry much of the load.

Benedictine and Central Catholic will be tough outs with their perimeter pressure, but East Tech has taken shape with 11 games in for transfers Isaiah Washington and Arron Pate. Washington gives the Scarabs a point guard capable of handling ball pressure from this tournament’s higher seeds.