Scientists may have just solved the mystery of Minnesota’s vanishing river.Beyond Grand Marais, the Brule River splits, tumbles over the Devil’s Kettle waterfall ... and disappears. For years, people have tried to figure out where the water goes.... 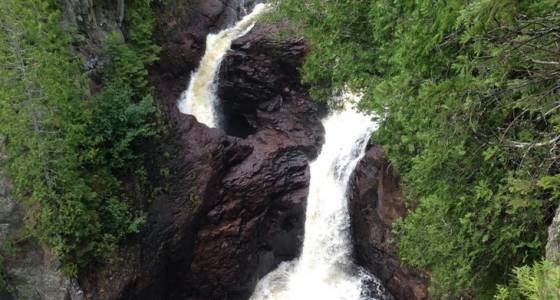 Scientists may have just solved the mystery of Minnesota’s vanishing river.

Beyond Grand Marais, the Brule River splits, tumbles over the Devil’s Kettle waterfall ... and disappears. For years, people have tried to figure out where the water goes. They took readings, they tossed logs and Ping-Pong balls and GPS trackers over the falls, too, only to watch them vanish, just like half the Brule River.

Now, finally, a researcher from the Minnesota Department of Natural Resources (DNR) thinks he’s cracked the riddle of the Devil’s Kettle.

The disappearing river, it turns out, reappears not far downstream and rejoins the Brule.

DNR mapping hydrologist Jeff Green used stream gauging equipment to measure the volume of water flowing above the falls and below. The amount flowing was virtually identical, which meant half the river wasn’t dribbling into the center of the earth or flowing underground to rejoin Lake Superior or any of the other wild theories that have been floated over the years.

Above the falls, the river flowed at 123 cubic feet per second. Several hundred feet below Devil’s Kettle, the flow was still 121 feet per second. In the world of stream gauging, Green explained, those readings are nearly identical. The river didn’t go anywhere.

“The readings show no loss of water below the kettle, so it confirms the water is resurging in the stream below it,” Green said in a statement.

Green and University of Minnesota researcher Calvin Alexander plan to test their findings by dumping vegetable-based dye into the pothole under the falls later this year, when the Brule is running low. The fluorescent, biodegradable dye is highly visible and won’t be easily diluted, even by a 50-foot waterfall, so the hydrologists plan to only use a few quarts of the Day-Glo dye.

So if the river didn’t stray far, why didn’t the Ping-Pong balls and other debris resurface downriver?

Alexander has a theory.

“The plunge pool below the kettle is an unbelievably powerful system of recirculating currents, capable of disintegrating material and holding it under water until it resurfaces at some point downstream,” he said in a statement.

But while the pounding falls captured Ping-Pong balls and logs, thrashing them around like a washing machine until they dissintigrated, the dye molecules won’t be held in Devil’s Kettle and should be visible downriver.

No word on whether the DNR will tackle the mystery of Bigfoot next.