Galleries Videos CONTACT ADVERTISE
Girne 12°
broken clouds
BUSINESS EDUCATION ENTERTAINMENT HEALTH POLITICS SCIENCE SPORTS TECHNOLOGY
15:40 Babbitt Alloy; an Efficient Bearing Surface
08:11 Stick it to “The Man” at the Zero Trust Security Summit
04:37 What to Consider When Starting Your Own Business
10:17 Clover POS System for Dental Offices
06:14 How Mobile Technology is Revolutionizing the World of Poker
20:31 The Importance of Banks in Our Lives
05:46 Things to Consider When Hiring a Criminal Defense Lawyer
09:15 Couple T-shirts are ideal for spicing up relationships
09:01 Laser Tattoo Removal and Its Amazing Benefits
07:58 Consolidate your medical bills with a debt consolidation
BIST
116955
GOLD
323.178
USD
6.1154
GPB
7.9150
EUR
6.6084
Breaking News
Why Go for Physical Therapy and How to Find the Best Therapist
Close

Science can help you reach instant enlightenment — but will it mess with your head?

A Navy SEAL, broad-chested and strongly built, floats peacefully on the water, as his recent deployment to a war-torn country becomes a distant memory.Sealed inside a pitch-black sensory deprivation tank in the Mind Gym at Navy SEALs headquarters in Norfolk,... 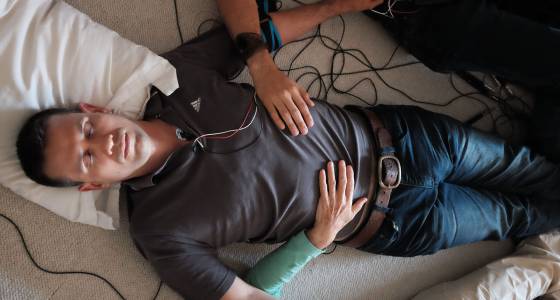 A Navy SEAL, broad-chested and strongly built, floats peacefully on the water, as his recent deployment to a war-torn country becomes a distant memory.

Sealed inside a pitch-black sensory deprivation tank in the Mind Gym at Navy SEALs headquarters in Norfolk, Va., electrodes attached to his head, he has reached an altered state of consciousness referred to as “ecstasis” or “stepping outside oneself.”

It’s a state achieved by many others throughout time. High-performance athletes are in ecstasis when they ski down huge mountains or surf giant waves. Monks attain it after years of meditation. Mystics feel it when they have visions. And the US government uses it to try to reset their most elite warriors after brutal battles abroad.

This state of mind is called “flow” or an “altered” or “non-ordinary state of consciousness” where “action and awareness start to merge. Our sense of self vanishes. Our sense of time as well. And all aspects of performance, both mental and physical go through the roof,” write Steven Kotler and Jamie Wheal, authors of “Stealing Fire: How Silicon Valley, the Navy SEALs, and Maverick Scientists are Revolutionizing the Way We Live and Work.”

But, it turns out finding flow, and reproducing it on command, isn’t easy. The athletes who know how to get into flow don’t know how to explain it, and scientists who could potentially map it haven’t until recently been able to find it. But, over the last decade, advances in brain science have allowed researchers to learn how it works so we mortals can recreate it.

For a long time, research into flow states was subjective — researchers had to rely on people’s self-reported experiences to understand altered states of mind. But advances in imaging technologies such as fMRIs (functional magnetic resonance imaging) over the last decade have allowed researchers to see what’s happening under the hood during various mental states.

During normal consciousness, the prefrontal cortex of the brain is buzzing with activity and stress hormones. But in flow states, scientists now know that brain waves slow down, stress hormones decrease and feel-good, social-bonding chemicals like endorphins and serotonin flood the mind.

As a result, people “in flow” look to increase cooperation and social bonds with others, as well as learn faster and be more creative — skills that are prized and almost impossible to teach, says Kotler.

For instance, neuroscientist Dr. Andrew Newberg took brain scans of nuns and monks deep in prayer who described feeling a oneness or unity with the world when they prayed — and there’s a neurological reason for that.

Activity in the part of the brain that is responsible for navigating our bodies through space (the right parietal lobe) slows way down during deep meditation, meaning that the brain loses track of the body’s physical boundaries — where the person begins and ends.

“At that moment, as far as the brain can tell, you are one with everything,” said Newberg.

Neuropsychopharmacologist Robin Carhart-Harris used fMRIs to study the effects of psychedelics on the brain.

Carhart-Harris found that the brain’s default mode network — the part of the mind that aimlessly chatters away all day, often causing a lot of distress — goes “offline” under the influence of LSD.

This is one of the reasons why scientists think psychedelic drugs are healing for those suffering from trauma or other mental conditions.

Think of Sufis, who enter trance states while twirling, or Native Americans, who reached mystical states during vision quests, or Tibetan monks, who learn meditation as a way of life. But Westerners need a whack over the head to break out of regular consciousness.

“In the West, we have such an entrenched ego identity. We have one channel of awareness, while other cultures, their dials move more freely between various states. Over here, our dial got rusted shut, so to ungum those works, we need stronger interventions,” says Wheal. “We don’t have much practice shifting between states.”

Sensory-deprivation tanks like the ones found at Navy SEALs headquarters, where soldiers can learn to process trauma, are having a renaissance all over the country. There are thousands of centers that offer the float-tank experience now, whereas a decade ago they were relatively rare.

Invented by Dr. John Lilly in 1954 for the National Institutes of Mental Health, the tanks were “specifically designed to help people shut off the self,” the authors write. Studies suggest that floating in the tanks increases theta waves in the brain, which are the also produced during meditation. Some users report that they hallucinate within the tanks, and others say it leads to heightened creativity.

Engaging in action sports — big-wave surfing, BASE jumping, rock climbing — is another way to trigger a “flow” state, say the authors.

In 2007, Carly Rogers, an occupational therapist from UCLA, got Iraq War vets to go surfing. The high that comes from riding a wave, combined with talk therapy, got the same results as a single dose of MDMA, which is commonly known as the drug ecstasy.

At his Necker Island getaway resort in the Caribbean, billionaire Richard Branson uses the action-sports trick to incite new business ideas. Between kitesurfing sessions, zip-lining to breakfast and hanging out in a cedar hot tub beneath the stars, chosen guests can pitch start-up ideas directly to him. Everything on the island is designed to keep people in flow — to turn off their conscious minds and stimulate creativity.

Sound can be another “state changing” trigger . Medieval churches “were designed with narrow walls to produce a ‘slap echo’ — a sort of a threefold bounce meant to represent the flapping of an angel’s wings,” the authors write.

“The gothic arches of Notre Dame and Chartres cathedrals act as giant subwoofers for the pipe organs.”

The authors describe a Funktion-One’s sound effects like “getting pressure-washed with a sonic firehose . . . there was no room for thinking at all.”

The digital artist Android Jones, live “paints” during music performances, sometimes in collaboration with Andrews. A graduate of George Lucas’ Industrial Light & Magic, his work has also been seen at the Sydney Opera House, at St. Peter’s Basilica at the Vatican, and on the Empire State Building, where his painting of the Hindu goddess Kali was projected 40 stories high.

The authors say his enormous images produce a “profoundly altered state” in viewers, and a 2012 Stanford study found “encounters with perceptual vastness, be it the endless spiral of galaxies in the night sky or Jones’ larger than life projections, triggers a self-negating, time-dilating sense of awe.”

While music, sports and drugs have helped us reach an altered state for hundreds of years, Mikey Siegel, an MIT and NASA-trained roboticist, has invented a new ecstasis “machine” that is very 21st century.

In 2011, Siegel was living in Silicon Valley and working as an engineer when he went on a long meditation retreat. After seven days of sitting ramrod straight, he was in agony. But, just as suddenly, he experienced a shift. His brain stopped judging the pain, and he felt it disappear.

He wanted to reach that state again, but it was harder to find it back home, surrounded by everyday life. So he put his engineering tools to use, launching a field called “enlightenment engineering.” First, he made a sensor that could convert his heart rate into an audio tone and wore it for three days straight. At the end of the three days, he’d figured out how to control his heart rate — getting him closer to that feeling he had on the retreat.

Since then, he’s founded a company called Consciousness Hacking, which has begun making “tech-assisted self-awareness devices” meant to help people “tune their internal environments” and reach non-ordinary states of consciousness on their own, Siegel says.

And that’s a good thing, the authors say. “These technologies help you learn about what’s happening inside your body and your brain, helping you get in control of yourself faster, with less mindless seeking,” says Wheal. “Instead of self-help courses or handfuls of vitamin supplements, these tools ideally offer accelerated self-mastery and [greater] well-being.”

Currently, Siegel’s working on a device that combines ultrasound, transcranial magnetic stimulation and transcranial direct stimulation, all of which shoot pulses into the brain, turning on and off various regions at your command.

“It’s not quite what decades of meditation training can produce, but it’s legitimate, reliable, repeatable state change,” Siegel says.

As a result, we may be one step closer to achieving the “flow” state at will, without relying on drugs or skydives or endless meditation.

But be warned: There is a risk of becoming a “bliss junkie,” the authors write. Dr. Lilly himself, the creator of the deprivation tank, is the poster child for going too deep into ecstasis. Soon after he patented his invention, he began experimenting with psychedelics inside the tanks, taking ketamine (an anesthetic that puts users in a trance-like state).

Predictably, things went awry when he fell into the tank one day and, immobilized by the drug, almost drowned. His wife found him floating face down and revived him. But even that didn’t stop his experiments into his own consciousness.

It was only when he had another near death experience and was warned by “entities” on the other side, he says, to stop his experimenting, that he gave it up.
There can be a downside, it seems, to pursuing nirvana on tap.

“What happens when we do have the keys to the kingdom?” asks Wheal. “If you spend all your time blissed out, Zenned out, drunk, stoned, sexed up or anything else, then you’ve lost all the contrast that initially made those experiences so rich — what made them altered in the first place.”