School district will keep Renaissance Academy open after all

Swayed by students' devotion to Renaissance Academy plus a $1 million donation to renovate and add new programs, Baltimore City Public School officials have decided to keep the innovative yet troubled high school open.The school, where in November 2015 one... 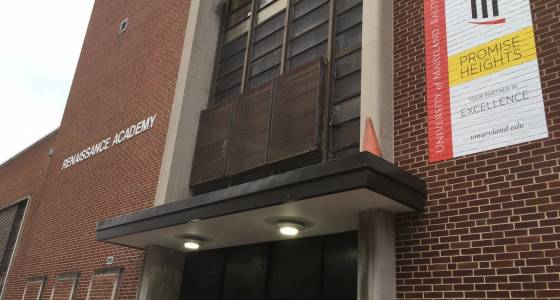 Swayed by students' devotion to Renaissance Academy plus a $1 million donation to renovate and add new programs, Baltimore City Public School officials have decided to keep the innovative yet troubled high school open.

The school, where in November 2015 one student stabbed a classmate who later died and, two months later, another student was killed in a shooting in a nearby apartment building, had been recommended for closure by school system leaders. But on Friday, Alison Perkins-Cohen, the school district chief of staff, told a meeting at the academy that officials would rescind that recommendation at Tuesday's school board meeting.

Perkins-Cohen called the $1 million donation "a factor," but not the deciding one. She declined on Friday to name the donor, who had read news reports in The Baltimore Sun about the school's recommended closure.

School officials will host further meetings to get community input on how to use the money to improve the school, which is currently housed on the third floor of Booker T. Washington Middle School in Druid Heights-Upton.

Samuel F. B. Morse Elementary School will close this summer and move into a new building with Frederick Elementary School. Baltimore schools CEO Sonja Santelises noted that the two schools are within...

Samuel F. B. Morse Elementary School will close this summer and move into a new building with Frederick Elementary School. Baltimore schools CEO Sonja Santelises noted that the two schools are within...

A proposal to move the academy to better quarters on the campus of Baltimore City Community College fell through because possible changes in the management of the college made officials reluctant to enter into a lease agreement, Perkins-Cohen said.

Several dozen members of the academy community — students, teachers, parents, volunteers and neighborhood leaders — gathered at the academy after classes Friday for the update on plans for its future from Perkins-Cohen and other district officials.

While most were relieved that the recommendation to close was rescinded, they remain worried about the school's future — because of its low enrollment of 262 students, and the limitations of its location in the middle school. Perkins-Cohen said high schools generally need about 500 students to get enough funding to offer a full range of activities.

Baltimore school leaders are exploring ways to relocate and rebrand Renaissance Academy High School after a third student there was killed in as many months.

Schools CEO Gregory Thornton says he is considering moving the school out of the space it now shares with Booker T. Washington Middle School...

Baltimore school leaders are exploring ways to relocate and rebrand Renaissance Academy High School after a third student there was killed in as many months.

Schools CEO Gregory Thornton says he is considering moving the school out of the space it now shares with Booker T. Washington Middle School...

Principal Nikkia Rowe said the school, which offers intensive mentoring and other services, had been on a trajectory to increase its enrollment and at one point had 326 students. But the uncertainty about its future, and lingering fears following the stabbing death of Ananias Jolley, 17, took a toll.

One student spoke passionately about the family atmosphere at the school, and his fear of losing that. Another student, an aspiring engineer, spoke wistfully about attending a resume workshop and hearing other students talk about classes in robotics and other programs that he wished Renaissance offered.

Several at the meeting sought assurances from district officials that the school wouldn't find itself back on the chopping block in a year. Perkins-Cohen said the $1 million investment should mean the school would stay open at least two or three years.

Others at the meeting demanded to know why there were no other locations the academy might move to, which would allow the school to offer more programs, clubs and sports that could help increase enrollment. And most simply wanted assurance that they could continue working intensely with kids who often come from impoverished homes and neighborhoods.

"It's been a strain for our kids," said Tayler Williams, an English teacher, after the meeting. "They are really afraid to lose what they built here."

Atiba Nkrumah, who heads the Marble Hill Community Association, volunteers at the school and was thrilled that the students had made such a persuasive case for keeping the academy open, and that they'd received so much support from faculty and neighbors.

"They wouldn't let it go," he said of the kids. "The love in this room, you can feel that."

Councilman Eric Costello, who represents the area, assured the crowd that district officials understood how important the school was to the students and the surrounding community. Saying he's had differences with school officials in the past, Costello said the district did extensive due diligence to try to find locations for the school and its community to stay together.

"Because that was the No. 1 thing we heard," he said. "We cannot tear these students apart after what they have been through and endured and are recovering from and now growing from. That is the last thing we can let happen."

Some favored moving to a new location because potential students and their parents will always link the current location to the death of Jolley in 2015. A jury found his classmate, Donte Crawford, 18, not guilty of first-degree murder.

Shawn Nelson, 19, graduated from Renaissance last year and now mentors current students. Despite all that his and other classes had been through, the school remains a vital part of their lives, he said.

"If they had to go somewhere else," he said, "I don't think other people would care as much about them as we do."