Orioles ace Chris Tillman is itching to get back on the mound, but he hasn't spent the first two weeks of spring training in an injury-induced cocoon.He has been throwing regularly on flat ground and taking part in fielding drills while he rehabilitates... 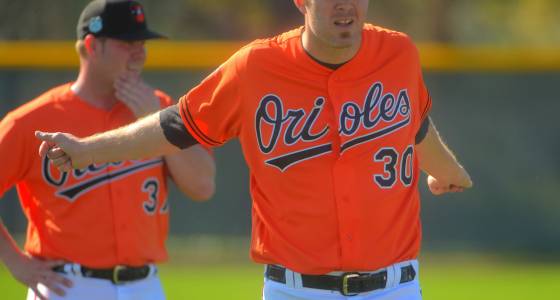 Orioles ace Chris Tillman is itching to get back on the mound, but he hasn't spent the first two weeks of spring training in an injury-induced cocoon.

He has been throwing regularly on flat ground and taking part in fielding drills while he rehabilitates his dicey shoulder. He's very much involved in the daily meetings and classroom sessions that go on out of public view at the Ed Smith Stadium complex.

He can even pass some time at this extra-long spring training, fishing at the edge of the small pond behind the covered batting cage that borders the Camden Yards replica practice field.

Perhaps most important, he has not let his inability to pitch right now affect his outlook or commitment to mentoring the young pitchers on the Orioles staff and encouraging the veterans who line up behind him in the projected rotation.

If it seems like only yesterday that he was one of those young pitchers, well, time does fly. Tillman has been at the top of the rotation for the past four seasons and he has grown into a player who is part of Buck Showalter's circle of trust.

He might flinch at the notion that he's a team leader, because he's an unassuming guy, but if you ask his manager, that low-key approach is a big part of it.

"Chris is one of those guys who's kind of a behind-the-scenes guy," Showalter said. "He's not in your face with it. He's going to be good at it because he has a real pure heart about it. He's got no agenda when he's talking to you. It's to help you and help the team.

"Because he's not one of those guys who's going to be beating his chest and saying, 'Look at me and notice where I am,' that actually makes his words carry more weight with the guys and he's got a really good presentation about it."

Tillman might be entering his final season in an Orioles uniform, but you won't hear much about that. If his contract situation were a priority, he might not have alerted the team in December when he experienced shoulder discomfort, which is expected to slightly delay the start of his walk year.

He said Tuesday that he is eager to get back in a normal routine because he thinks this year's rotation — with up-and-coming young starters Kevin Gausman and Dylan Bundy and two motivated back-end veterans — has a chance to be one of team's best in a while.

"We've got a good group of guys, and I think — as a group — the key for us is to be a little more consistent," Tillman said. "Last year, we had times when I was going well, when Kevin was going well and Dylan and everyone went well. I think coming together as a group and being more consistent and knowing what it's going to take … I think that's a big part of the learning curve for some of these guys."

Tillman watched his two younger rotationmates make important strides in 2016. He watched them weather some difficult moments to establish a comfort level in the major leagues, which could allow them to take another big developmental step this season.

"I think that's a big part of it," Tillman said. "This game, everyone says when you step between the white lines, it's the same game. But there's a lot of other crap that goes on that you're not used as a young guy and they handled it really well, a lot better than I handled it. I'm proud of them for that. They put all these expectations on them and that's not fair. That's not my job. My job is to make their job easier. I'm proud of them. They've done a great job and I think the best is yet to come."

While there will be a lot of focus on how much the continued growth of Gausman and Bundy could improve the Orioles' chances of going deeper in the playoffs this year, Tillman said veteran left-hander Wade Miley could be an important wild card despite a rocky beginning with the club late last season.

"The thing with Wade, I've seen him pitch so many times," Tillman said. "I pay attention and know what's going on. I've seen him pitch well and I know what he's capable of. The first couple starts he had with us, I knew that wasn't Wade, and he was just getting used to it and getting comfortable. He's a pretty good pitcher. He's pitched well against us multiple times and I've seen him for a long time.

"The same with Ubaldo [Jimenez]. When he gets consistent with his delivery, everything falls into place."

Read more from columnist Peter Schmuck on his blog, "The Schmuck Stops Here," at baltimoresun.com/schmuckblog.