As Samantha Santiago made her way to the Lake Ralphine boathouse to weigh her fourth catch of the day, other fishermen gaped at the trout dangling from her cord stringer. The fish weren’t biting much early Sunday during the annual Fishing Derby at Santa... 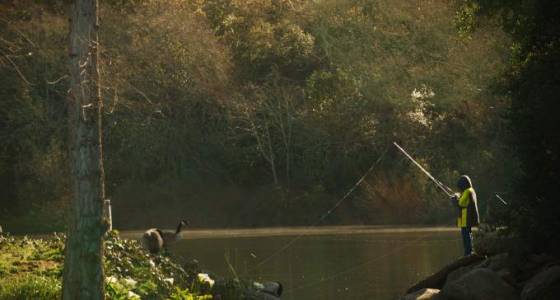 As Samantha Santiago made her way to the Lake Ralphine boathouse to weigh her fourth catch of the day, other fishermen gaped at the trout dangling from her cord stringer.

The fish weren’t biting much early Sunday during the annual Fishing Derby at Santa Rosa’s Howarth Park, so everyone was wondering how this 4-year-old Santa Rosa girl in a plush blue coat was reeling in trout so quickly.

“She’s so excited to fish. She didn’t even want to have breakfast,” said her mother, Veronica Alvarez as they made their way to the scale.

Samantha smiled shyly when A.J. Alcocer, a Santa Rosa firefighter who helped organize the event, read out the total weight: 11.6 ounces. An hour still remained in the competition and Samantha wasn’t ready to quit.

After a short bathroom break, the girl rushed back to the lake and caught her fifth and largest trout. Weighing in at 12 ounces, it earned her the top award for largest fish caught in the 8-and-under age group. She walked away with a $30 gift card to Dick’s Sporting Goods store. She also won bragging rights for catching more fish than anyone else in the tournament.

While the low-30s temperature may have kept the fish from biting, it did not keep more than 140 children from competing in the derby, which was open to kids 15 and under. The event was hosted by the Santa Rosa Firefighters Association and the city’s recreation and parks department.

Some families arrived an hour before the event started to claim spots around the lake.

For Sawyer Gillion, 8, of Santa Rosa, it was his first derby. And he was ready to go by 5:30 a.m., said his mother, Giana Gillion.

Sawyer sought out experts at pro shops for tips on catching fish during the derby, which his father, Rob, once competed in.

“I did it when I was a little older than Sawyer,” said Rob Gillion, who celebrated his 43rd birthday at the derby on Sunday. “I was the only one who caught a catfish that day.”

As his son looked through his tackle box for different lures to try, Rob Gillion reminded him that fish don’t always bite. “Catching — that’s always a challenge,” he said.

“That’s the sport of fishing,” responded Sawyer, who has been fishing since he was 2.

Kids have fun out by the lake even if they don’t catch anything, said Alcocer, who also volunteered to teach children and their families how to fish a day earlier at the lake during the Fishing in the City event. The firefighter association hosted the fishing clinic along with the city’s recreation and parks department and the state Department of Fish and Wildlife.

Alcocer said he recognized about a dozen kids at the derby who had attended the fishing clinic the day earlier.

“People don’t realize how much fun they can have in a park like this — and it’s so close to town,” Alcocer said. He spent his childhood fishing out on the lake with his father, Tony Alcocer, a retired Santa Rosa firefighter who also volunteers at the derby.

The state agency stocked the lake on Friday with more than 1,000 pounds of trout, said Jeff Tibbetts, a city recreation coordinator. Bass, bluegill and catfish also are found in the 25-acre lake.