A Salvadoran woman at the center of a high-profile civil rights lawsuit alleging Frederick County sheriff's deputies unlawfully profiled, detained and arrested her on a federal immigration warrant in 2008 was granted a reprieve Monday to remain in the country... 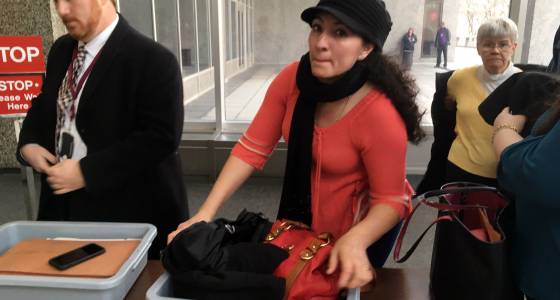 A Salvadoran woman at the center of a high-profile civil rights lawsuit alleging Frederick County sheriff's deputies unlawfully profiled, detained and arrested her on a federal immigration warrant in 2008 was granted a reprieve Monday to remain in the country at least through this summer, her attorneys said.

Roxana Orellana Santos, 37, had a routine check-in pertaining to her undocumented status with U.S. Immigration and Customs Enforcement officials in downtown Baltimore on Monday morning. She walked out about three hours later with a new check-in date set for August, her attorneys said.

Santos has received similar reprieves before, but she and her attorneys said they feared this check-in — the first under the Trump administration — might turn out differently. Trump has pushed policies to expand deportations, including of individuals previously deemed a low priority for deportation by immigration officials under the Obama administration.

"There was just a sense in the air that people just weren't sure what was going to happen," said Nick Katz, senior manager of legal services at the advocacy organization CASA and one of Santos' attorneys, of the atmosphere in Baltimore's ICE offices Monday. "We were prepared to argue her case."

Santos' attorneys also organized a rally outside of the ICE offices to show officials that she had support. Her employer wrote a letter vouching for her, Katz said.

Santos has a 16-year-old son who is a permanent legal resident and a 9-year-old son and 5-year-old twin daughters who are U.S. citizens, putting her in a category of undocumented parents that the Obama administration said would not be prioritized for deportation.

The U.S. Supreme Court declined Monday to review a Frederick County case in which a woman challenged local authorities' power to arrest her on an immigration violation, cementing her victory in a case that has been closely watched by both sides of the immigration debate.

The U.S. Supreme Court declined Monday to review a Frederick County case in which a woman challenged local authorities' power to arrest her on an immigration violation, cementing her victory in a case that has been closely watched by both sides of the immigration debate.

Joanna E. Cuevas Ingram, another one of her attorneys, said Santos also would be subjected to domestic abuse by her father if she is returned to El Salvador, and is listed as a beneficiary on her husband's pending asylum claim.

Then there is her pending lawsuit in Frederick, where she is "a critical witness" who must be allowed to remain in the United States in order to testify, Ingram said.

Santos was sitting on the curb eating a sandwich outside her workplace in Frederick in 2008 when two sheriff's deputies approached and began questioning her, according to court documents. She gave them an identification card from El Salvador, and the deputies arrested her on an outstanding immigration warrant related to her failing to show up to court after having been detained after crossing into the country years before.

Santos filed her lawsuit against the county and the deputies who arrested her about a year later, arguing they had violated her rights against unreasonable searches and seizures. She lost in District Court, but won in the U.S. Court of Appeals for the Fourth Circuit, which ruled that local and state authorities cannot arrest or detain someone simply on the suspicion that they are in the country illegally, and that Santos could sue the county, but not the individual deputies.

The U.S. Supreme Court declined to hear the case, and it was remanded back to District Court, where it remains open.

A county spokeswoman referred questions to the sheriff's office. Frederick County Sheriff Chuck Jenkins said he could not discuss the case in detail, but believes his agency and his deputies "have done nothing wrong."

Jenkins said Santos' arrest had nothing to do with the county's ongoing partnership with ICE in detaining individuals with outstanding immigration warrants, which he said takes place at the county's detention center only. He said his deputies have never asked individuals on the street about their immigration status.

Jenkins also said he is open to expanding his office's partnership with ICE moving forward, because "this enforcement is coming" one way or another.

"You can either do like some of your legislators want to do, or like some of your communities or counties declaring themselves sanctuary cities, and be resistant to it, or you can say, 'You know what? I want to be proactive with immigration authorities, so when they do come into my community I can have a say,'" Jenkins said.

Santos said she is proud of standing up for herself with the lawsuit, but less confident about her future given the Trump administration's immigration policies.

Her eyes watered as she looked at her twin daughters playing in the plaza outside the ICE offices before she went inside, not knowing if she would be detained.

"I'm hopeful that they understand that I'm an honest, truthful, hard-working person and that all of these people are here supporting me because of that," she said in Spanish, surrounded by her attorneys and supporters. "I hope they see that."

An ICE spokesman said privacy procedures prevented him from commenting on the case. All he could confirm, he said, was that Santos was not in ICE custody.