MOSCOW -- Thousands of Russians marched through Moscow on Sunday shouting slogans including "Russia will be free!" and "Putin is war!" to mark two years since opposition leader Boris Nemtsov was gunned down outside the Kremlin.Nemtsov, a former Russian... 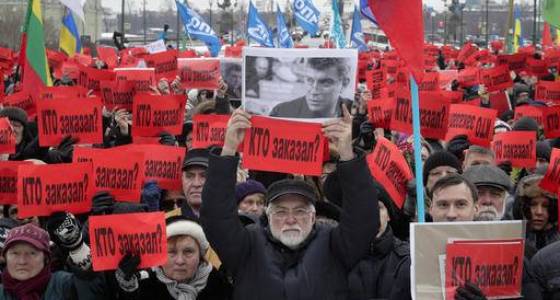 MOSCOW -- Thousands of Russians marched through Moscow on Sunday shouting slogans including "Russia will be free!" and "Putin is war!" to mark two years since opposition leader Boris Nemtsov was gunned down outside the Kremlin.

Nemtsov, a former Russian deputy prime minister, was a fierce critic of Russian President Vladimir Putin. His Feb. 27, 2015 death, in what appeared to be a contract killing, sparked an outpouring of anger and fear from Russia's beleaguered opposition movement.

The protest in Moscow was the largest opposition gathering since a similar memorial march for Nemtsov last year. Moscow police said 5,000 attended the event but organizers but the figure in the tens of thousands.

"It's very important that after two years people continue to come out and show their solidarity with the ideas for which Boris Nemtsov fought for and gave his life," said opposition activist Ilya Yashin, who was Nemtsov's friend and colleague, Interfax news agency reported.

Participants carried Russian flags, banners of opposition political parties and placards with quotes from Nemtsov including "If there's Putin, there's no Russia," and "Our only chance left is the street." Many carried cardboard Russian flags with bullet holes in them.

The event largely occurred without incident, but police made several arrests and opposition leader Mikhail Kasyanov was attacked during in the march by an unknown assailant who threw green dye in his face.

"This is the hysteria of the government. They do not know what to do. The government is afraid," Gennady Gudkov, a former deputy of Russia's lower house of parliament and an opposition activist, said of the attack on Kasyanov.

After the march, thousands of people went to lay flowers on the site on the central Moscow bridge where Nemtsov was killed by an attacker who shot him several times in the back as he was walking home with his girlfriend.