It's the kind of talk that keeps a Minnesota museum director up at night.Amid signs the White House may soon propose eliminating federal funding for the arts, anxiety is rising among arts leaders across the state. Minnesota has a lot to lose: It ranks sixth... 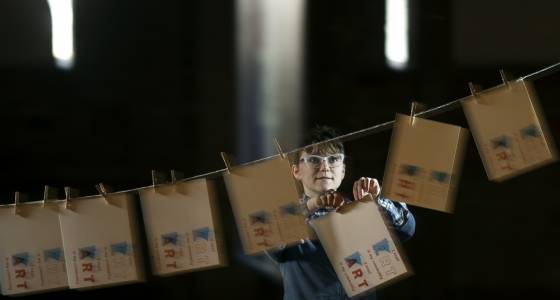 It's the kind of talk that keeps a Minnesota museum director up at night.

Amid signs the White House may soon propose eliminating federal funding for the arts, anxiety is rising among arts leaders across the state. Minnesota has a lot to lose: It ranks sixth nationally in the National Endowment for the Arts' latest round of grants.

"It's absolutely terrifying all of us," said Kaywin Feldman, director of the Minneapolis Institute of Art. She views the NEA and the National Endowment for the Humanities as critical to museums' research and exhibitions, such as the recent "Martin Luther" blockbuster show that drew more than 100,000 people. Over the past decade, the museum received $1.2 million from the NEH and $258,000 from the NEA, among other federal funds.

Funding for the arts and humanities — which makes up less than one-tenth of 1 percent of the federal budget — is about much more than money, Feldman said, echoing arts leaders across the state. "The threat of cutting the funding sends the message that the arts are expendable."

Yet some conservatives argue that federal funding, however small, unnecessarily politicizes the arts.

NEA money flows into Minnesota in several ways. The state has consistently received more in grant funding than other states with similar populations. Those grants — which totaled $5.3 million to Minnesota in 2016 — have backed huge exhibitions in the Twin Cities and tiny projects in small towns. About $2.7 million of the 2016 total went to Minneapolis-based Arts Midwest, which then redistributes some of that money to other states in the region.

National Endowment for the Arts, 2016

National Endowment for the Arts, 2016

The Children's Theatre Company received $90,000 for new works, such as the world premiere of a musical based on Dr. Seuss' "The Sneetches." The Hmong Cultural Center in St. Paul won $10,000 to teach students to play the qeej, a traditional instrument. The Franconia Sculpture Park, an hour northeast of the Twin Cities, got $15,000 for arts mentoring.

The Minnesota State Arts Board received $741,100 from the NEA for fiscal year 2016, helping fund dozens of grants to artists. Of the agency's $35.1 million budget that year, $26.8 million came from the state Arts and Cultural Heritage Fund.

In recent decades, the NEA has worked to reach every Congressional district with its grants. Last year, at least one NEA grant landed in each of Minnesota's eight districts.

Eliminating the NEA would require congressional approval. And despite perennial criticism from conservative groups such as the Heritage Foundation, the endowments have traditionally been backed by both parties. "It's a quality-of-life issue here in Minnesota," said U.S. Rep. Betty McCollum, a Democrat. Spokespersons for Republican Reps. Tom Emmer and Jason Lewis did not respond last week to interview requests.

Arts leaders are encouraging their trustees to call elected officials and making plans to rally at the State Capitol this week. By Friday, more than 800 people had registered to attend Arts Advocacy Day on Tuesday — double last year's attendance, said Sheila Smith, of Minnesota Citizens for the Arts.

On a recent Sunday in Minneapolis, artists and others stopped by the Soap Factory gallery to express their support for the arts in an artsy way — on hand-printed postcards.

"I need art in my community because …" the postcards said in red ink.

Artist Camille Erickson greeted people as they entered, pausing from screen printing to help them look up their representatives. During last year's legislative session, Erickson sent postcards "on a much smaller scale" and, with the help of Minnesota Citizens for the Arts and others, this year expanded the project. Using colored pencils, markers and watercolors, people gave their answers.

"Art creates a union between the emotional and intellectual landscapes, the lack of which leaves only a shallow vacuous existence," printed Stephen Cruze, a Minneapolis writer who works at the Minneapolis Institute of Art. Cruze, 47, decided to come after hearing a news report about the NEA.

"It's one of my resolutions this year — to be more involved in community action," he said. "I feel I was kind of a lazy liberal during the Obama administration.

But the political threat is not yet clear. While an internal memo, obtained by the New York Times, showed that the White House included the endowments, as well as the Corporation for Public Broadcasting, on a list of programs for possible elimination, it has made no public proposals.

"There continues to be very strong, bipartisan support in Congress for the agency," said David Fraher, executive director of Arts Midwest, the regional arts organization which regrants NEA funds.

Based on his conversations in Washington, D.C., Fraher believes that senior White House staff members support and respect the NEA's work. It's important that arts organizations make their case, showing why arts funding is a good investment, he continued. "But I also don't want to get into a premature, Chicken Little kind of moment."

In Congress, Minnesota's top Democrats are worried that President Donald Trump's budget will include zero dollars for the arts and humanities, said McCollum, the lead Democrat on the House appropriations subcommittee in charge of funding the NEA and NEH. "It's very frightening," she said. "Before we've always had one backstop — whether the Senate or the president, and this time, we have zero."

Supporters of the NEA point out that it reaches rural areas where funding — and sometimes art — is hard to find. About 14 percent of the U.S. population live in non-metro areas, according to the NEA, about the same share as NEA-funded projects.

"There is no other group that makes sure art is available and encouraged in every corner of our country," said Ryan Taylor, president of the Minnesota Opera, who has served as a NEA panelist.

But Romina Boccia, a research fellow at the Heritage Foundation, argues that "it's very clear" the NEA is trying to hit every congressional district to get political support. "That is politicizing the arts," she said by phone. "That doesn't mean we are necessarily getting the best art we can get."

To celebrate its 75th anniversary, the Bemidji Symphony Orchestra wanted to stage a grand performance: Mahler's Second Symphony, known as the Resurrection Symphony. It would require two guest soloists, three choirs and a bigger venue.

"It's a heavy-duty undertaking for a small, community orchestra," said MaryAnne Wilimek, the symphony's executive director. So the nonprofit applied for a NEA grant and, in 2013, got $10,000. "It was a magnificent way to end our 75th season," she said, "and we couldn't have done it without that money.

Arts organizations such as the orchestra help draw young professionals, Wilimek said, who might be considering the area because of a job or more affordable housing.

"To say this is a frill or not important to economic development is extremely shortsighted," she said.