It will be a challenge for the Orioles to carry one – let alone both – of their Rule 5 picks on the Opening Day roster, but both outfielders Aneury Tavarez and Anthony Santander have made an early impact in Grapefruit League play.In the Orioles’ 8-3... 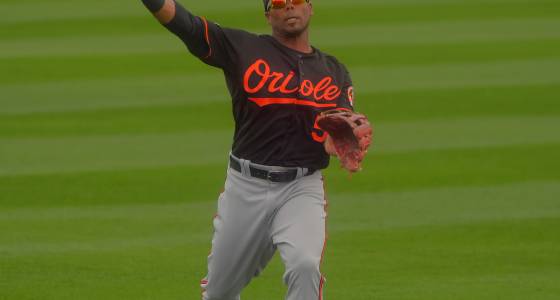 It will be a challenge for the Orioles to carry one – let alone both – of their Rule 5 picks on the Opening Day roster, but both outfielders Aneury Tavarez and Anthony Santander have made an early impact in Grapefruit League play.

In the Orioles’ 8-3 home opener win over the Pittsburgh Pirates, Tavarez hit an RBI single down the right-field line to break a 3-3 tie as part of a five-run seventh inning. He went on to steal both second and third and then scored on Trey Mancini’s two-run double.

When the Orioles selected Tavarez, 24, from the Boston Red Sox –coming off a season in which he hit .330/.374/.495 with 13 triples and 20 stolen bases at the Double-A and Triple-A levels – they knew he could add an element of speed that the Orioles lacked. He serves as a potential leadoff option and gives the team a difference-maker on the base paths off. The Orioles figured his best path to making the team would be by showing he can help upgrade the team’s defense at the corner outfield spots.

Since then, the Orioles have signed outfielder Craig Gentry and also re-signed outfielder Michael Bourn, who will be out a month with a broken right ring finger. Both moves were made with an emphasis on defense.

“The landscape’s kind of changed the last two or three weeks,” Orioles manager Buck Showalter said. “But [Tavarez is] a left fielder, potential leadoff guy. [We’re] trying to get our arms around him defensively.”

Santander, 22, didn’t play Sunday, but is 2-for-6, including an RBI single in Saturday’s game against the Pirates in Bradenton. He still has yet to play the field after recovering from offseason shoulder surgery, but Showalter expects that to happen soon.

He’s different than Tavarez in that he’s more of a pure hitter, but Santander must also show he can hold his own defensively.

“Santander’s a pretty good hitter, and he’s getting closer to being able to get on the field and take a look at it from that perspective,” Showalter said. “Tavarez is a plus-runner, real athletic. Both of these guys you’d like to have in your system. Teams don’t have a whole lot of guys running around like that. We have some, but not as many as … you always want more.

"The problem with this is you don’t have that ability to put them in your system except for Baltimore [because of their Rule 5 status]. But there’s always ways to work it out.”