Galleries Videos CONTACT ADVERTISE
Famagusta 24°
clear sky
BUSINESS EDUCATION ENTERTAINMENT HEALTH POLITICS SCIENCE SPORTS TECHNOLOGY
12:08 Guide To Online Sports Betting: How To Choose A Sportsbook
08:28 What Are Some Reasons to Consult a Brain Injury Lawyer?
09:24 Blockchain Solutions for Enterprises: How To Increase Efficiency And Profitability
07:06 How To Deal With A Car Crash In New York
17:43 Tips to keep in mind while choosing the casino site
11:34 Relation Between Employee Theft and Pre-employment Screening Check
04:37 Search your own desired site to play sports for betting
18:00 Top 3 Career Path Options for Business Analysts Preview
15:35 The history of Imen Jane, who is the influencer and the charges on the...
18:48 Sebastian Vettel's Greatest Races
BIST
1124
GOLD
458.978
USD
7.6460
GPB
9.7922
EUR
8.8844
Breaking News
Top 3 Career Path Options for Business Analysts Preview
Close

TAMPA — Vocal crowds of demonstrators making weekly visits to the Tampa office of U.S. Sen. Marco Rubio have gotten the Miami Republican booted from the building.7 Months Ago1 Month Ago7 Months AgoThe owner of Bridgeport Center, a gleaming, nine-story office... 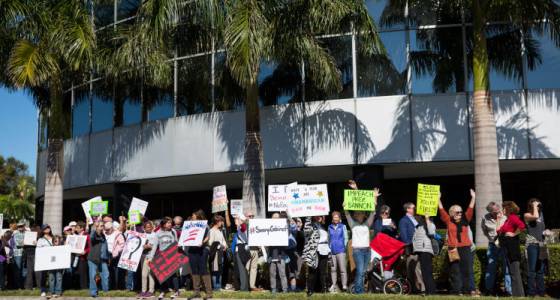 TAMPA — Vocal crowds of demonstrators making weekly visits to the Tampa office of U.S. Sen. Marco Rubio have gotten the Miami Republican booted from the building.

The owner of Bridgeport Center, a gleaming, nine-story office center at 5201 Kennedy Blvd., notified Rubio's office on Feb. 1 that it will not renew its lease. The reason: The rallies have become too disruptive to the other tenants and a costly expense for the company, said Jude Williams, president of America's Capital Partners.

"A professional office building is not a place for that," Williams said. "I understand their cause, but at the end of the day it was a security concern for us.

Rubio is now faced with the prospect of going without a brick-and-mortar office until a new location can be found. Rubio's annual lease expired in December and he has been renting on a month-to-month basis since then working to negotiate a new agreement, according to his office. The staff needs to leave Suite 530 by Friday and does not have a new location lined up. Negotiations with another building recently fell through.

"We are actively looking for new office space, and our goal is to remain accessible and continue providing prompt and efficient service to all Floridians," Rubio spokeswoman Christina Mandreucci said in an email statement Tuesday. "Until we find a permanent new home in the Tampa Bay area, we will have a representative from our Tampa Bay office available to assist constituents on a daily basis and reachable at 1-866-630-7106."

The statement did not address the reason for the move.

A variety of progressive groups who oppose President Donald Trump's agenda have gathered at least once a week at the building, lining up on the sidewalk along Kennedy to wave signs and shout messages.

Many of the groups are coalescing around the Indivisible Guide, a document that outlines strategies for constituents to engage members of Congress. One of those strategies is to establish a regular presence at local offices, and demonstrators have been setting up in front of congressional offices across the country.

Rubio's seven statewide offices have been lightning rods for demonstrations. Gatherings in front of the Tampa office have surpassed 150 people.

In a previous statement on the demonstrations, Rubio's office said the Tampa location has two employees and serves a number of counties, "yet they have met with dozens of these liberal activists."

"This is nothing more than a strategy outlined in an online activist manual to carry out 'mass office calling,'" the statement said. "Their goal is to flood offices with calls and emails and then go to the press and claim they aren't getting a response."

The management at Bridgeport Center placed barricades and stationed security guards in front of the building and at parking lot entrances to keep demonstrators off the property.

But the presence of the groups along the public sidewalk has still created problems for visitors and tenants making their way in an out of the building and trying to work, Williams said. The building has 21 tenants occupying roughly 180,000 square feet. Rubio has been a tenant since February 2014.

"It's not political," Williams said of the decision. "It's for no other reason than good office management. Our duty is to keep a good peaceful office building environment for our tenants and that's not what they bargained for."

U.S. Sen. Bill Nelson has an office in the Sam M. Gibbons U.S. Courthouse building on Florida Avenue in downtown Tampa. But the Democratic senator has not yet drawn demonstrations.

Indivisible Tampa co-founder Michael Broache said the demonstrators never intended to get Rubio kicked out of his office.

"Our intention is to make sure the senator hears our voices and acknowledges the concerns of his constituents," said Broache, 32. "Unfortunately, we've requested town halls and indicated he's willing to do that at this point, so that's why we've been present."

Broache said he hopes Rubio's office can find another site as centrally located as the current office, which attracts demonstrators from throughout west central Florida. Rubio's staff has been polite and accommodating to constituents who have made appointments, he said.

"But ultimately our goal is to engage with Sen. Rubio himself," Broache said. "He's the one making these policy decisions."