LeRoy Moore is among those who believe that if the Rocky Flats National Wildlife Refuge opens next summer as planned, that will be too soon — at least 24,110 years too soon.That time span represents the half-life of radioactive plutonium-239. And it's... 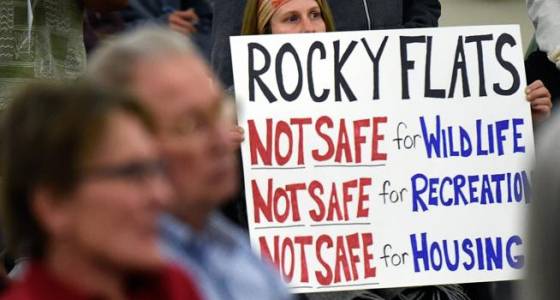 LeRoy Moore is among those who believe that if the Rocky Flats National Wildlife Refuge opens next summer as planned, that will be too soon — at least 24,110 years too soon.

That time span represents the half-life of radioactive plutonium-239.

And it's the potential of humans' exposure to that and other materials in the soil at the former Rocky Flats nuclear weapons plant just south of Boulder that stands as the greatest reason Moore and others believe the 3,963-acre property should be forever left to animals and the wind.

"There is no reason why we should take chances with people being exposed to plutonium if they visit the refuge," Moore said.

He added, "We live in an area that has abundant places to enjoy wildlife and nature without going to a place like Rocky Flats."

Moore represents one end of the spectrum of opinion in what has been a passionate debate surrounding safety concerns represented by Rocky Flats dating back to long before the 1989 raid by the FBI that suspended most operations at the plant and put it on the list of Superfund sites.

However, state and federal officials have deemed the area to be safe, and the opening of the refuge has many supporters as well.

At a public "sharing" session held Wednesday night at the Broomfield Community Center, refuge manager David Lucas told a standing room only crowd of about 125 people that he did not see health risk for visitors to the planned refuge.

"If we did not believe it was safe, we would not be opening it up," Lucas told the crowd.

Production at Rocky Flats came to a halt in 1992, followed by decommissioning and demolition, plus a $7 billion cleanup that was completed in October 2005. That cleanup included decommissioning, decontaminating, demolishing and removing more than 800 structures, including six plutonium-processing and fabrication building complexes.

The DOE's Office of Legacy Management remains responsible for the long-term surveillance and maintenance of the roughly 1,300-acre Central Operable Unit at the center of the Rocky Flats site, which is closed to the public and is surrounded by — but is not part of — the refuge.

The DOE, the Colorado Department of Public Health and Environment and the Environmental Protection Agency have all signed off on the safety of the proposed refuge, and there are plenty who see the objections of Moore and other skeptics as obstructionist thinking rooted in political ideology.

Boulder City Councilwoman Lisa Morzel is the city's voice on the Rocky Flats Stewardship Council, on which 10 local county and city governments are represented. She stops short of a full-throated endorsement of opening the refuge little more than a year from now.

"I want to see the soil sample analysis," she said, referring to testing of samples at proposed refuge public access points.

"From my perspective, I am happy having the wildlife there," she said. "DOE and CDPHE and EPA have decided the site has met all federal regulatory cleanup provisions, but one of the things that I was very adamant about with this FLAP grant program is that we do some soil sampling, and see what the state of the soil is at these access points, and if there are contaminants of concern at concentrations that might be of concern."

"Our biggest thing from Broomfield's standpoint was making sure that the plans moving forward were consistent with the Comprehensive Conservation Plan that was developed several years ago, right after the refuge was established," he said.

That plan spells out that the refuge will include 12.8 miles of multi-use trails, with 3.8 miles of hiking-only trails, a visitor contact station, interpretive overlooks, viewing blinds and parking areas.

But as Allen said, the final trail alignment and length of the completed trails is actually still "a work in progress."

Federal dollars in the mix

Andrew Valdez is an open space planner for Jefferson County, which has taken the lead for the two counties and four municipalities that have teamed in the application for the FLAP grant that will help fund the Rocky Mountain Greenway crossings to and from the refuge.

The coalition consists of Boulder and Jefferson counties, Boulder, Broomfield, Arvada and Westminster, with Superior having elected not to participate.

"We put in for about $6.5 million of improvements, which included a wildlife underpass," Valdez said. "That piece of the project was not considered eligible, so we were only awarded $2.84 million, and we have a formula that we used to divide up the contributions the different jurisdictions were going to make, so those contribution amounts would go down proportionately."

He qualified that statement by saying the grant committee had actually "shortlisted" the Flats-area coalition for the $2.84 million, and that a letter guaranteeing the award is still to come.

The grant requires a minimum 17.2 percent match from the local communities, with the balance of the cost to be picked up by the U.S. Department of Transportation. That means each of the six governments participating in the project will be on the hook for about $81,000 each.

Valdez said the grant committee will soon make a decision on the funding eligibility of three potential crossing points for the Greenway trail, choosing between two on the east side off of Indiana Street, along with a a third on the northern perimeter where the High Plains and Coalton Trails meet the refuge at Colo. 128.

Valdez added that soil sampling for contaminants will be done at whatever crossing points are selected.

Megan Davis, a policy analyst for the Boulder County commissioners, said the commissioners have not taken an official position on the opening of the refuge — other than wanting to ensure that it be done safely. Davis emphasized the importance of soil sampling, and monitoring of the relevant data to make sure health and human safety standards are being met.

"Boulder County is committed to continuing to work with the regulators to make sure that they are adhering to the protocols and processes they agreed to, to ensure public safety," Davis said.

"We feel like it's important to monitor and really pay attention to that, and ensure that public safety is addressed now and into the future, because of the history of what has happened at Rocky Flats, and the activities at Rocky Flats. We are committed to doing that."

The safety of the soil — more accurately, the dangers posed by possible latent contaminants in any soil that might be disturbed through construction and potentially distributed by wind or rain — was very much on the minds of those who attended Wednesday night's session in Broomfield.

Even though the meeting was called only to preview and get feedback on a 3,500-square-foot, $8.3 million visitor's building — which will include 1,500 square feet of exhibit space highlighting the many-layered history of the Flats property — many on hand were far more interested in talking about whether Rocky Flats is really a good place to be welcoming thousands of members of the public every year.

Although Lucas and a meeting facilitator said repeatedly that a future "sharing session" — most likely in April — will focus on safety and risk management, numerous people still tried to push that volatile subject on Wednesday night.

Gale had to be cautioned by security personnel to abandon her vocal protests to avoid being escorted from the room. Several other protesters had greeted meeting attendees arriving at the community center that evening with signs bearing messages such as, "What you don't know can hurt you."

Protester Marian Whitney of Arvada was asked if she believes the refuge will inevitably open, activists' actions notwithstanding.

"Yes," Whitney conceded. "But we want to be warning as many people as possible, to protect their health."

Focusing the conversation at the evening's meeting back on the planned Flats visitors' center, Lucas acknowledged that the long history of Rocky Flats is likely to remain a ripe topic of debate for years to come.

"Rocky Flats is, in my mind, a unique and dynamic story," Lucas said. "I'm personally pretty darned excited to construct a building where we can tell this story and have this discussion."