Robbers hit another cellphone store and get away again

At least the fifth robbery since late October of a cellphone store in the Lehigh Valley and northwest New Jersey was reported Saturday evening, this time in Lopatcong Township. Township police Lt. Scott Bisci confirmed the robbery at an AT&T store at... 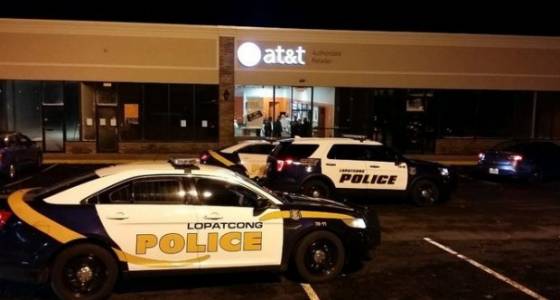 At least the fifth robbery since late October of a cellphone store in the Lehigh Valley and northwest New Jersey was reported Saturday evening, this time in Lopatcong Township.

Township police Lt. Scott Bisci confirmed the robbery at an AT&T store at 760 Memorial Parkway, across from the Hillcrest Shopping Center.

He wasn't able to go into great detail, but said the robber or robbers got away and the car they were driving was recovered in Easton.

He said he couldn't confirm or deny there were two robbers who wore ski masks and tied up the clerk in a back room.

That is what happened in at least four other robberies in recent months -- one of which is tied to a Palmer Township homicide.

An investigator with another department who was listening to emergency radio reports said it "sounds identical to our incidents."

Bisci said he might be able to provide more information later once it's cleared by the Warren County prosecutor.

Cellphone stores in the Lehigh Valley have been tied to a number of crimes in recent months, including the Nov. 21 killing of Michael Davis outside his Palmer Township home.

The 25-year-old worked at Verizon at 301 Town Center Blvd. in Forks Township, which was robbed at gunpoint Oct. 29. The store manager reported he was assaulted and abducted Nov. 22 outside his home, also in Palmer. In both Palmer incidents, the assailants were two men.

Then the night of Jan. 5, the AT&T Authorized Retailer at 3859 Nazareth Pike in Bethlehem Township was robbed by two men, one of whom brandished a handgun, according to police. Police after that robbery said they were investigating to see if it was tied to the Forks Township crime.

On Jan. 16, two men armed with handguns and dressed in dark clothing entered the Cellular Connection store about 8:06 p.m. p.m. at 3075 Tilghman St. in South Whitehall Township, police said. The men forced employees into an office area and made off with an undetermined amount of merchandise, police said.

They fled to Easton's West Ward but were able to walk away from a silver Hyundai, which was parked in the Spruce Street alley.

A Wind Gap Verizon store was robbed at 10:48 a.m. Feb. 9, with Slate Belt Regional police confirming it involved two robbers and a clerk who was tied up in a back room.