The idea had been in the back of Christian Gillette’s head for a while.He can shoot the three. Maybe he could set a record someday.So when his shots were falling in warm-ups last month before a game at Tomales, he felt like he might have a good night.That... 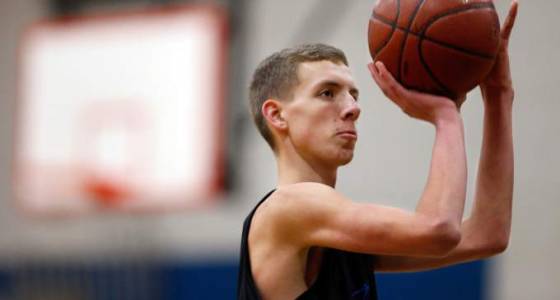 The idea had been in the back of Christian Gillette’s head for a while.

He can shoot the three. Maybe he could set a record someday.

So when his shots were falling in warm-ups last month before a game at Tomales, he felt like he might have a good night.

Gillette’s performance, one of many solid games this season for the junior, has helped lead Rincon Valley to a North Coast Section Division 6 semifinal game Wednesday at Rio Lindo Academy.

“My goal was to beat the record, but I didn’t know if it was going to happen,” he said. “Once I made a few shots in the first quarter, I felt like, ‘Alright, it’s going to be a good game.’”

Gillette made seven of eight 3-point attempts in the first quarter alone. He made one more in the second quarter.

Coach Ted Nelson isn’t much of a stats guy and doesn’t post his team’s averages online. But he was curious at the half about how many Gillette had hit.

“Sometimes at halftime I’ll look at the book, mainly to see if there’s something we’re struggling with,” he said. “First, who had foul trouble? Then that little thing in the back of my head was, ‘I wonder how many 3s he’s at already.’”

An assistant coach said he thought the school record was nine.

“Hey, you’re right there, you have to break it,” Gillette said.

With the Eagles up 49-33 at the half, the same five starters came out for the third quarter. And Gillette’s shot hadn’t cooled one bit.

“He hit a 3 pretty early on and tied the record,” Nelson said. “Then we thought we’d let him play for a while to see what happened.”

“It was pretty incredible,” Gillette said.

By then, all the Rincon Valley fans in the small gym knew what was happening.

“It wasn’t one of those things where we were going to let Christian shoot a million shots and see what happens; it was in the normal flow of the game,” Nelson said. “They were playing a defense that was more advantageous for the 3, a lot of zone.

“It’s a pretty unselfish team, much like the Warriors today,” Nelson said. “His teammates could tell he was on and kept feeding him the ball. The guys on the bench were having a good time.”

Every time Gillette hit another 3, the bench players leapt up and cheered.

“In the second half, whenever we were shooting in front of our bench, they’d all be yelling ‘Shoot it!’” Nelson said.

By the time Gillette reached 44 points — his previous high was 27 — the coach sat him down.

“He was on the bench cheering the other guys on,” Nelson said.

That wasn’t a surprise for Nelson.

He first met Gillette when the young man was a volunteer coach for his church youth team, teaching 9- to 11-year-olds how to pass and shoot.

Most 3-point shots made in high school basketball