Reward at $40,000 in slaying where son killed protecting mom

CaptionCloseHOUSTON (AP) — A reward has grown to $40,000 for information leading to the arrest of two people involved in the fatal shooting of an 18-year-old Houston sandwich shop employee as he tried to protect his mother last week during an attempted... 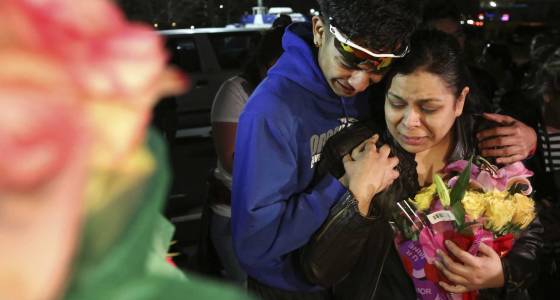 HOUSTON (AP) — A reward has grown to $40,000 for information leading to the arrest of two people involved in the fatal shooting of an 18-year-old Houston sandwich shop employee as he tried to protect his mother last week during an attempted robbery at the store where they both worked.

Hilda Vasquez is urging people with information about the slaying of her son, Javier Flores, to "just turn them in." The grieving mother said Saturday if the two assailants did this to her son, "they're going to do it to anybody."

She described how one of two robbers pointed a gun at her head Wednesday night. Her son ran to her and was shot.

She says her bleeding son died on the floor of the Subway store. The robbers fled empty-handed.