WARRENSVILLE HEIGHTS, Ohio - U.S. Rep. Marcia Fudge carried on a cordial conversation with constituents on Saturday, telling them that "I want to hear from you," at a town-hall meeting on the Tri C East Corporate College. The tone of the Democrat's meeting... 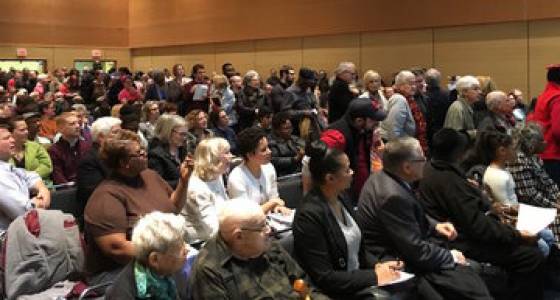 WARRENSVILLE HEIGHTS, Ohio - U.S. Rep. Marcia Fudge carried on a cordial conversation with constituents on Saturday, telling them that "I want to hear from you," at a town-hall meeting on the Tri C East Corporate College.

The tone of the Democrat's meeting was in sharp contrast to recent town halls where Republican legislators have been lambasted by constituents, whether or not the public officials attended.

President Donald Trump did not attend, and became a virtual pinata for Fudge and her constituents to whack away at during the meeting that ran more than two hours, drawing an over-capacity crowd of more than 300.

Fudge said President Barack Obama had been criticized by political opponents for issuing executive orders, "and we have had one every day for 30 days," since Trump took office.

One attendee pointed out that Obama was also castigated for spending $8 million over the course of eight years for travel and lodging. Trump has spent $10 million already, the constituent said.

Health care was a significant topic because the Affordable Care Act, Medicare and Medicaid are under siege by the Republican-controlled government.

Fudge told the Democratic-majority town hall on Saturday that being vocal and visible still count even if every branch of government is in GOP hands.

She quoted the Dr. Martin Luther King, saying that "There comes a time when silence is betrayal."

Fudge told the crowd that Ohio's state legislators "are as bad as the people I work with. I won't say dumb as a box of rocks, but they are."

She said both groups are recklessly forging ahead, taking actions that will have enduring repercussions long after the public officials are out of office.

Fudge said repeal or reduction of ACA coverage will not just hurt the poor. "It will affect every single American.

She asked how many doctors and nurses were in attendance Saturday and it appears that dozens raised their hands or stood up.

Immigration was another hot button.

An Iranian immigrant who has a master's degree in engineering and works in Solon said that now he "doesn't feel safe."

He said his girlfriend, who is also a credentialed engineer, has been assaulted twice at a Walmart.

"What can you don in congress and what do you expect us to do in the meantime?" he asked.

Fudge said "we are all immigrants,'' and told the man "the next time you have a problem call me and I will come and stand by you."

She said she is trying to set up a meeting with Trump.

One person in the audience told her to "make sure he brings Frederick Douglass." That referred to recent remarks by Trump suggesting that he did not know the 19th-century abolitionist diesd in 1895.

School funding and gun violence also were up for discussion.