ST. PETERSBURG — After more than eight years of marriage, U.S. Rep. Charlie Crist has filed for divorce.3 Weeks Ago6 Months Ago4 Months Ago"I think the world of Carole. She's an amazing person. It just didn't work out for us," the former Florida... 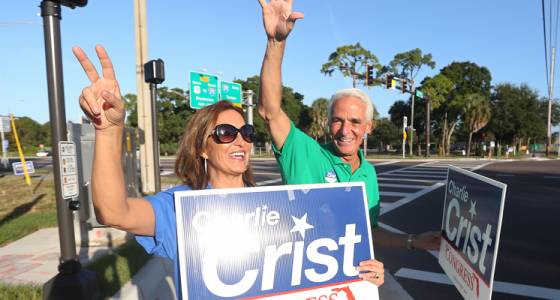 "I think the world of Carole. She's an amazing person. It just didn't work out for us," the former Florida governor told the Tampa Bay Times. "I wish all the best for her."

Crist, 60, said the divorce should have no impact on his service.

He and Carole, 47, own a Parkshore condo in downtown St. Petersburg, and details about whether he will continue to live there have yet to be worked out.

"The marriage of the parties is irretrievably broken," says the divorce petition Crist filed Friday in Pinellas County.

His filing states that he anticipates a "collaborative law process" in which the divorce is settled without dispute and antagonistic court battles. He said also that he expects both will abide by a prenuptial agreement they entered into shortly before their 2008 marriage.

Mrs. Crist, who did not respond to a phone message, has two daughters in New York from her first marriage. Crist has no children and married once before, in 1979, for less than a year.