Pimlico Race Course needs to be redeveloped at a cost between $250 million and $320 million to assure the 147-year-old north Baltimore facility remains a suitable home for the Preakness but questions loom about who might pay for it.A widely anticipated study... 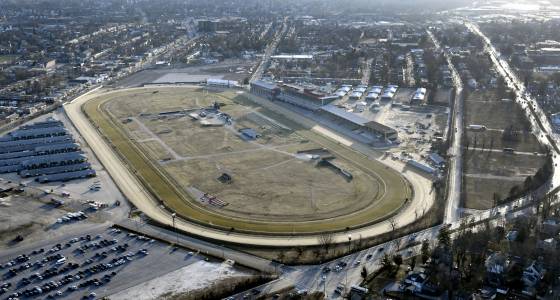 Pimlico Race Course needs to be redeveloped at a cost between $250 million and $320 million to assure the 147-year-old north Baltimore facility remains a suitable home for the Preakness but questions loom about who might pay for it.

A widely anticipated study released Friday by the Maryland Stadium Authority lays out a tentative plan to renovate the track's clubhouse and grandstand, replace the backstretch barn area with parking and create a new stable area complete with a tree-lined pedestrian promenade.

The study makes no recommendation about whether Pimlico should be rehabilitated, but lawmakers and the track operator say they're ready for serious discussions about who might pay for the project. Those talks could determine whether Pimlico continues to host the Preakness each May. The second leg of horse racing's Triple Crown, Preakness is the state's largest sporting event, one that drew a record crowd of 135,256 and generated $94.1 million in betting handle last year.

"Is there the financial and political will to move forward?" said Del. Sandy I. Rosenberg, a Baltimore Democrat whose district includes Pimlico and who called for the study last spring. "I think there will be."

"It's going to require a huge public commitment," he said.

But Ritvo said the Stronach Group is open to discussing a public-private partnership to modernize the dilapidated facility.

State and city lawmakers worry that if no solution is reached, the Stronach Group could push to move the Preakness to Laurel, where the company holds the vast majority of its Maryland racing days and has invested millions of dollars in renovations.

"I am very optimistic about the report," said Baltimore Mayor Catherine Pugh at a Friday morning appearance. "It will call for public-private partnerships and investment in the track. And we're going to do whatever is necessary, because it creates jobs and opportunities, especially for people who live in that neighborhood. We will do everything we can to ensure the Preakness stays in Baltimore."

Pugh said it's essential to invest in the neighborhood around the track in addition to the facility itself.

But the need for public reinvestment in Pimlico comes at a time when the city faces a $130 million budget shortfall in its school system and after Gov. Larry Hogan scrapped the $2.9-billion Red Line light rail across Baltimore and pulled the plug on redeveloping State Center, a westside state office complex.

Hogan's office offered little comment aside from acknowledging its release. "The Governor's Office has not reviewed it," a Hogan spokeswoman said in an email.

State House Speaker Michael E. Busch likened Pimlico's history to that of cherished baseball stadiums such as Fenway Park and Wrigley Field. He said the track is worth preserving and hopes the Stronach Group will be instrumental in making that happen.

"I don't think you can forget the tradition and historic significance of a place like Pimlico," Busch said. "We were hoping Stronach Corp. would put money into Pimlico. Whether they want to make a partnership with other private entities, certainly people would appreciate it."

Asked if the state would join with Stronach in efforts to update the venue, the speaker replied: "They'd have to come up with some kind of proposal that made sense to the state. They own the track."

Though track officials have suggested Pimlico needs to be completely rebuilt, the study offers hope that a sweeping renovation could work.

"Based on our observations, there do not appear to be any situational factors that cannot be overcome with regard to continue hosting the Preakness at Pimlico," it reads. "The facilities do have significant challenges which should be addressed and many of these pose threats to the continued existence of Pimlico and the success of the Preakness. There is, fortunately, an opportunity to address these challenges and continue hosting the Preakness at the Old Hill Top for the foreseeable future."

But the study makes it clear that even a renovation would be massive, with 15 "essential" items — ranging from fire protection to ceiling repairs to additional bathrooms — needing to be addressed.

"Given the age and state of the facilities at Pimlico, we do not believe that a piecemeal renovation approach will deliver the desired result of resolving these challenges, nor would such an approach be feasible given the extent of work required," it reads.

Some analysts quickly questioned the value of spending heavily on Pimlico.

Keeping the Preakness at the current location would be more about tradition than economic rationale, said economist Anirban Basu, CEO of the Baltimore-based Sage Policy Group.

"There is another option — it is Laurel," said Basu, who has studied the state's racing industry. "There are advantages offered by Laurel. It has a central location between Baltimore and Washington. There is better parking at Laurel. The physical condition of the Laurel race track is far superior to the physical condition at Pimlico."

He added that Laurel might be more appealing to the well-heeled individuals and corporate interests that drive the economic impact of the Preakness.

While the Preakness has an emotional connection to Baltimore, "we economists are not known as being very emotional," Basu said.

State law says the race can be moved to another track in Maryland "only as a result of a disaster or emergency," so the Stronach Group would need legislative support to move the Preakness to Laurel.

Rosenberg said he hasn't spoken to a single political colleague who wants to see the race moved. He's optimistic that after a second phase of the study, which could unfold over the remainder of this year, state lawmakers will consider public-private funding options for Pimlico during their 2018 legislative session. He said the Stronach Group's willingness to pay for part of the project would be essential.

"I would urge my colleagues, the governor and the mayor that this is not just an investment in Northwest Baltimore but for the entire Baltimore region," Rosenberg said.

"Keeping the Preakness in Baltimore is critical to all of Baltimore City," said city councilman Isaac "Yitzy" Schleifer, who represents communities around Pimlico.

The track's owners need "to recognize the importance of our communities" in the area, he added, calling for a public-private effort to upgrade the commercial district between Park Heights Ave., the Belvedere corridor and Sinai Hospital.

Questions about Pimlico's state have lingered for years, with track operators worrying each spring that a catastrophic problem could arise in the weeks before the Preakness. In 2015, for example, water pressure problems caused the toilets to stop working on Preakness day. Worse still in the Stronach Group's view, the venerable structure cannot accommodate the luxury suites that have fueled substantial revenue growth for the Kentucky Derby.

Despite those concerns, inaction has persisted because of the perceived cost of razing and replacing a facility that will be used only a few weeks a year.

The stadium authority launched its study last spring with the backing of state legislators, the Stronach Group and the Maryland Racing Commission, an appointed panel that regulates the industry. The authority, the Baltimore Development Corp. and the Stronach-owned Maryland Jockey Club shared its $175,000 cost .

If stakeholders request it, a second-phase study, costing $105,000, would make specific recommendations for redeveloping Pimlico.

Stronach officials have said the sensible economic solution for them is to run at one track rather than two. And they've opted to spend millions of dollars to add state-of-the-art barns, luxury seating and new landscaping at Laurel, with more planned improvements on the way.

At Pimlico, meanwhile, they've paid only for modest cosmetic improvements and have pared back racing days to just 12 this year.

Ritvo said the company simply makes more money running day-to-day at Laurel. He's confident that with added renovations, that facility could host a successful Preakness, though the character of the event would change, with no infield seating, a smaller overall crowd and a greater emphasis on selling luxury suites.

That idea is anathema to many Baltimore residents, politicians and racing traditionalists. When Ritvo and Jockey Club President Sal Sinatra broached the idea of moving the Preakness two years ago, they faced an immediate backlash. Hogan was among those who said the race should remain in Baltimore.

Ritvo said the Stronach Company is in no way determined to move the race.

"If everybody is willing to pitch in and pay for a project at Pimlico, we're willing to work with that idea," he said. "But as a purely private venture, it makes no sense for us."

He said his greatest hope is that the study will spur serious discussion among state and city lawmakers about how much of a priority rehabilitating Pimlico really is.

"I'm excited that we're talking about it and not just kicking the can down the road," he said. "Something's going to have to happen. Some tough decisions will need to be made."