When Reggie Lynch was sitting out last season as a transfer, he decided to make a statement while watching an exciting NCAA tournament.Lynch tweeted a picture of the 2017 Final Four as “The Goal!”Seemed absurd at the time, considering he... 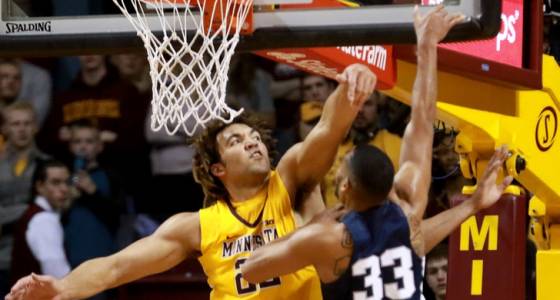 When Reggie Lynch was sitting out last season as a transfer, he decided to make a statement while watching an exciting NCAA tournament.

Lynch tweeted a picture of the 2017 Final Four as “The Goal!”

Seemed absurd at the time, considering he watched his Gophers go 8-23 overall and 2-16 in the Big Ten. While making that type of postseason run is still far-fetched, it’s hard to figure out what the ceiling is for this hot team this season.

Already the most improved team in college basketball, the Gophers extended their winning streak to seven games Saturday behind Lynch’s 11 blocks in a convincing 81-71 victory over Penn State in front of an announced sellout crowd of 14,625 at Williams Arena.

Lynch was right, and he has been a huge part of it.

Lynch, along with newcomers such as Akeem Springs, Amir Coffey and Eric Curry, is a main reason why Gophers coach Richard Pitino was so optimistic before this season.

The Barn chanted “Reggie! Reggie!” late in the second half when the junior recorded his 11th block, one away from Gophers legend Mychal Thompson’s school (and Big Ten) record of 12 set in 1976.

“That’s why he chose Minnesota,” Pitino said of the Edina High School product, who came to the Gophers after two seasons at Illinois State. “He wanted to play for his home state. He didn’t want to go anywhere else. He wanted to come here to play for the name on the front of the jersey. I’m sure he’s dreamed of that moment.”

In the first half, Lynch had six blocks to break Randy Breuer’s single-season record of 89 set in 1981-82. Lynch now has 95 on the season.

Twice in the first half, Lynch picked up two blocks on the same possession. He was clearly on his way to something special, and the crowd knew it.

Lynch seemingly tied Thompson’s record with 33 seconds to go when he swatted Mike Watkins’ layup attempt. But one of Lynch’s earlier blocks ended up counting as a deflection instead.

Still, he appreciated the fans giving him a standing ovation.

“That was something that I did not expect at all,” Lynch said. “When it happened, I was just like, ‘Wow. This feels great. This is awesome.’ Even when the chant was going on, our team was doing really well. That was mainly what I was focused on.”

Lynch, who has fouled out of eight Big Ten games this season, had zero fouls Saturday, which he said was more impressive than his block total. Playing foul-free allowed him to protect the rim with reckless abandon.

The Gophers’ frontcourt dominated the Nittany Lions, as sophomore Jordan Murphy finished with 16 points and 16 rebounds. Minnesota’s 15 blocks were two away from the program record and the most in a Big Ten game by the Gophers.

They picked up a huge confidence boost Wednesday with an 89-75 victory over No. 24 Maryland, their fifth conference road victory this year. That game was ruled by the guards, who combined for 64 points.

Saturday, Nate Mason, Dupree McBrayer, Springs and Coffey had another big performance, going for 52 points. The Gophers led 39-28 at halftime with Mason scoring 14 of his 17 points in the first half. He nearly finished with a triple-double with 10 rebounds and eight assists.

Murphy was asked after the game what he thought of the potential of the Gophers, who sit in a tie for third place in the conference. David Joles, Star Tribune The University of Minnesota's Reggie Lynch (22) set the school's single-season shot block record on this rejection of Penn State's Shep Garner (33) in the second half of the Gopher's 81-71 win Saturday, Feb. 25, 2017, at Williams Arena in Minneapolis, MN.] DAVID JOLES � david.joles@startribune.com Gophers vs. Penn State, men's basketball

“We’re a really deep and versatile team,” he said. “We have a lot of pieces. Honestly, I think sky’s the limit for us.”