Downtown officials need to recognize the volume of interest among Minneapolis residents — some voiced in a recent James Lileks column on skyway map apps and some in letters to the editor regarding unresolved problems with the Nicollet Mall remodel,... 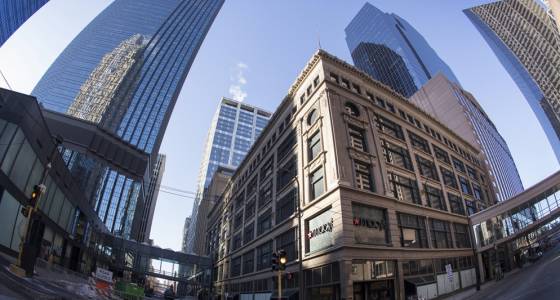 Downtown officials need to recognize the volume of interest among Minneapolis residents — some voiced in a recent James Lileks column on skyway map apps and some in letters to the editor regarding unresolved problems with the Nicollet Mall remodel, as well as in planning meetings to make the Super Bowl successful. Everyone will be best served if downtown residents are invited to at least one general open forum with the committees overseeing Nicollet Mall, skyway improvement and the stadium so that we can provide our ideas and advice to make Minneapolis and the great state of Minnesota proud again.

Most members on the various committees do not live downtown and are out of touch with reality. Please give us taxpayers and members of the general public an opportunity to help you achieve your goals of success for the Nicollet Mall remodel, skyway map apps and the Super Bowl extravaganza. All you have to do is listen to our ideas, opinions and experience. This is an election year in Minneapolis. Residents should become active on these issues and vote accordingly. Our greatest assets are our unique skyway system, the Nicollet Mall and the Vikings’ home at the new U.S. Bank Stadium. We want to become involved and voice our opinions to someone willing to listen.

Employers should put their money where their mouths are

In response to “Cafe owners charge ahead with pay changes” (Neal St. Anthony column, Feb. 20), a little math would’ve helped readers understand this issue better. The state’s minimum wage, $9.50 an hour, is only $19,760 per year working full time, with no days off, before taxes are taken out.

For the owner of the Birchwood Cafe to declare that she cares about workers when what she pays locks workers into poverty, or necessitates two full-time jobs to feed their families, is shameless hypocrisy. Especially when advertising in your restaurant that you support the local economy — because what could be more local than the workers who cook your customers’ meals?

I applaud the commitment that food business owners Dan Swenson-Klatt and Danny Schwartzman have made to putting their money where their mouths are by upping and equalizing their wages. Every business does have to walk a fine line between its ethical priorities and its ability to stay open, but refusing to pay a living wage is not the way to maintain that balance. Fewer hours, more tables, fewer menu choices — these are just three of many ways to put money toward higher wages.

I hope the City Council, Minnesota Legislature and business owners come up with a viable and compassionate response to the problem of non-living-wage jobs. They’re doing workers (who are voters and taxpayers) a disservice to let another session end without fixing this. And our future as a viable economy depends on it.

We dine in restaurants fairly often, sometimes with other friends. “Cafe owners charge ahead with pay raise” has inspired us to try to patronize mainly those places such as Butter Bakery and Common Roots Cafe, where owners are eliminating tipping (an outdated and unfair way of paying help) and raising prices in order to try to pay all their employees a living wage.

Hooray for the owners in the article! We will be at your restaurants soon. And wouldn’t it be great if this movement would gain momentum before Minneapolis hosts the next Super Bowl, so that many low-wage restaurant workers could benefit financially, just like their employers will?

If a raise puts you in a higher tax bracket, count your blessings

The Star Tribune published an article that reinforces a common misperception of the way marginal federal tax brackets work. In “5 things to know before filing 2016 tax returns” (Feb. 19), the author says that getting a raise “can be a mixed blessing if it lifts you into a higher tax bracket.” This implies that you might in some way be worse off after the IRS taxes your higher income. That is false. When good fortune lifts you into a higher tax bracket, the higher tax rate only applies to the amount by which your taxable income exceeds the high end of the lower bracket. For example, if you were married filing jointly in 2016, you would pay the IRS 10 percent of your taxable income up to $18,550, so $1,855. If you made $18,650 in taxable income that year, that would put you in the 15 percent tax bracket, but the 15 percent rate would apply only to the last $100 of taxable income, so your tax would be $1,870 ($18,550 times 10 percent plus $100 times 15 percent). By making an extra $100, you are $85 better off after taxes. It works the same way for all the tax brackets. There is no “mixed blessing.” You are never penalized for moving into a higher tax bracket (though some people would like you to think so).

Who is going to speak for the students who want to learn?

I am concerned about the Feb. 19 letter from an attorney for the School Law Center referring to a “prohibition against dismissing students for unintentional behavior.” I have been a volunteer in Minneapolis public schools since the early 1980s. In those many years I have seen lots of intentionally bad behavior by kids of every race and color. I have seen plenty of suspensions.

All this behavior takes away time for the teachers to spend with the students who want to learn.

So my question for the attorney from the School Law Center and the Minneapolis Public Schools is: When are you going to do something for the students who want to learn? Instead of coddling the ones who seem to be able to disrupt classes at will.

Complaint was over the top; the paper had no business running it

Inclusiveness? A Feb. 20 letter writer claims that dreamcatchers sold by target “trivialize and demean indigenous culture” and are “hurtful, harmful and terribly confusing” to children.

The evil Target? Imagine how demeaning it was to grow up in a Christian household and see one of the holiest days of our calendar represented by a pastel colored “bunny” with large eyes and oversized buck teeth?

Seriously, I don’t know what is worse than someone who would actually write a letter like this and call Target’s offices or the Star Tribune for publishing such nonsense.