LOS ANGELES -- Los Angeles Mayor Eric Garcetti's toughest competitor in his campaign for a second term might not be another candidate.Anxiety over taller, denser development, a jump in violent crime and the city's notoriously fickle voters together inject... 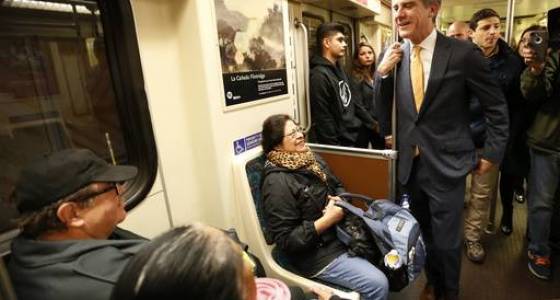 LOS ANGELES -- Los Angeles Mayor Eric Garcetti's toughest competitor in his campaign for a second term might not be another candidate.

Anxiety over taller, denser development, a jump in violent crime and the city's notoriously fickle voters together inject a faint hue of uncertainty into what otherwise looks like a lopsided contest.

Slim and polished, the 46-year-old Democrat is nearing the end of a relatively steady first term blessed by an improved national economy. He helped secure new funds for rail lines intended to help unclog freeways, relaxed business taxes and championed a $1 billion program to get control of a homeless crisis.

Powerful business and labor interests are behind him, and he's successfully discouraged competition. The mayor faces a field of 10, little-known rivals on March 7 and none has raised the millions of dollars needed to become better known in a sprawling city that reaches from the Venice Beach boardwalk to tract homes in the suburban-like San Fernando Valley.

The mayor, however, shares the ballot with a proposal intended to restrict large real estate projects that challenges his vision for building thousands of new apartments clustered around train stations.

Growing pains are nothing new in LA, as can be witnessed in the congested freeways. But questions about development and density - and what the city of nearly 4 million should become in decades to come - are coloring campaigns across city government this year.

The slow-growth proposal known as Measure S, Sonenshein says, is "the wild card in city elections."

Mann and others backing the restrictions say the city too often bends to politically connected developers whose large projects with high rents drive out lower-income residents, contributing to homelessness, while increasing congestion and traffic.

Garcetti opposes the proposal, along with a long line of unions and businesses. He warns it would kill a string of projects intended to house the homeless and would drive up rents.

The election comes at a time of renewal and struggles for the nation's second-largest city.

Once-dreary downtown has seen a rebirth and is home to a buzzing restaurant and nightlife scene. A stronger economy has helped bring jobs, including into the tech industry hub known as Silicon Beach. A region without an NFL team for two decades now has two, the Los Angeles Rams and Chargers.

But poverty rates remain alarming, and housing costs are among the nation's highest. It's been said traffic can't possibly get worse in LA, but the downtown construction boom proved otherwise.

Meanwhile, violent crime has climbed for the third consecutive year, jumping by 37 percent from 2014 to 2016.

Mitchell Schwartz, a former Clinton administration aide who steered then-Sen. Barack Obama's 2008 campaign in California, said he entered the race because the mayor's talk of progress doesn't square with what he sees across LA.

"You don't see the improvements in day-to-day life," Schwartz says. "Anyone who is driving knows about the potholes everywhere."

As always, one of the biggest questions in Los Angeles is who will vote.

Angelenos tend to greet local elections with a collective shrug, and turnout sometimes struggles to get into double digits.

It won't help that the November presidential contest left many voters dispirited. Incumbents are often discussed with a cringe. And with a relatively small a number of voters in play, there's a higher chance of surprises.

With Garcetti dominating the race so far, leading challengers are hoping to hold him below 50 percent of the tally next month, which would force the mayor into a May runoff against the second-place finisher.

As the front-runner, the mayor is facing political expectations.

Widely seen as a future candidate for governor, Congress or U.S. Senate, Garcetti's credentials could be dinged if he turns in a shaky showing against a less-than-intimidating field.

"When a mayor is running largely unopposed by any major candidates ... then they are kind of running against themselves," Sonenshein notes.

Ending up in a runoff would be an embarrassment, but failing to run up the score could make him look vulnerable.

"In some ways, it's a no-win situation," Sonenshein says.